Marinko Matosevic will kick off his US Open campaign under lights on Arthur Ashe Stadium against Roger Federer, while Sam Stosur and Jarmila Gajdosova are also scheduled on show courts. 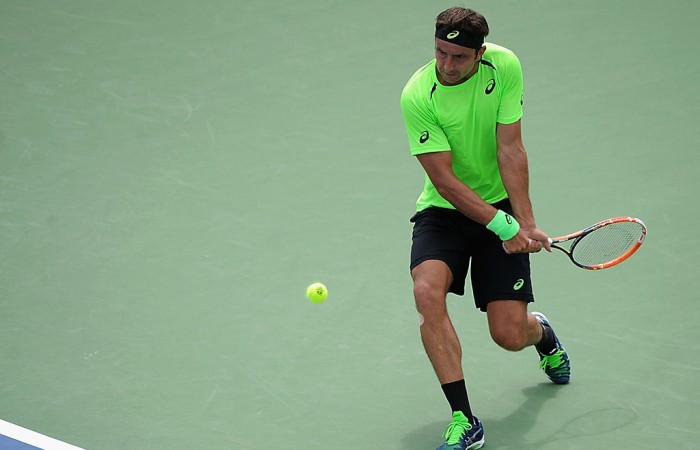 It’s up there with the most daunting of first-round assignments; Federer is the in-form player coming into the US Open, having reached the final at the ATP Masters event in Toronto and backing it up the following week by going all the way to the title in Cincinnati, also a Masters-level event. With Rafael Nadal out and Novak Djokovic below par, many pundits believe the stars are aligning for a 19th major crown for the Swiss great. Yet he won’t be thrilled to see Matosevic on the other side of the net under lights on the world’s biggest court; the Aussie is spending his third year entrenched in the top 100 and has been as high as No.39. In 2014 the Victorian picked up his first two Grand Slam main draw victories – at Roland Garros and Wimbledon – and now has the luxury of swinging freely given he has broken his first round losing streak at the majors. With impressive power and fitness and no apparent fear of the big stage, Matosevic could present a stern test for the world No.3.

Although he was outside the top 100 when US Open entries were determined – hence the wildcard – Tomic has since vaulted back inside the world’s top 70 after an impressive return to form following double-hip surgery. The highlight was a victory at the ATP Bogota event in July and since then he has maintained good hardcourt form, qualifying for back-to-back Masters events in Toronto and Cincinnati. He faces an explosive yet enigmatic opponent in Dustin Brown, a player who has the sheer talent to pull off any shot but lacks the consistency to do so regularly. Tomic is ranked 30 places higher than the German, who has played just one hardcourt event leading into the US Open.

The US Open marks a milestone for the big-serving Groth – it’s the first time in his career that he has gained direct entry into the main draw at a Grand Slam event. Such a feat has been made possible by a career-best season in 2014, during which he cracked the top 100 – he currently sits at No.104 – after reaching the semifinals of the ATP Newport event. Although his hardcourt form leading into Flushing Meadows hasn’t been the strongest, he has drawn a Spaniard who has played just one match in the past month – a first round loss at a claycourt Challenger event in Germany.

It’s been an heartwarming comeback for Gajdosova after a 2013 season decimated by mononucleosis; after dipping outside the world’s top 300 in March 2014, ITF titles in Nottingham and Vancouver have helped boost her back onto the cusp of the top 100. Receiving the reciprocal wildcard into the main draw as reward for her efforts, she has drawn soaring teen Madison Keys, one of the game’s most impressive prospects and who will give Gajdosova a match in the power stakes. Expect big hitting between two players who ceaselessly attack; this match will come down to who can reign in their unforced errors while still managing to be aggressive. Keys will enjoy the benefit of vocal home crowd support on Flushing Meadows’ second-biggest court.

Sam Stosur has found herself in this very situation before; seeded and facing Lauren Davis in the first round of a major on a show court. That was back in 2011 when Stosur took on the young American on Rod Laver Arena in the first round of Australian Open 2011. Much has changed since then; Stosur is no longer in the top 10 while the then 443rd-ranked teenaged Davis is now a 20-year-old ranked inside the top 50. Yet while Davis has lost her last two matches leading in to the US Open, Stosur enjoyed something of a return to form last week in New Haven, where she trounced world No.8 Eugenie Bouchard en route to the semifinals. Her heavy, high-kicking topspin against the 157cm-tall Davis, plus her experience and past success at Flushing Meadows, should be factors in her favour.

Having qualified for a Grand Slam main draw for the first time in her career, Barty will look to continue her good form when she takes on Zahlavova Strycova in her fourth straight match. It’s a tough ask – the Czech is ranked 29th and following on from her Wimbledon quarterfinal finish managed to reach the same stage at last week’s New Haven event. It’s hard to gauge Barty’s form – outside of US Open qualifying – given she hasn’t played since Wimbledon, but the talented Aussie with the big forehand and shotmaking class should present a tricky prospect for the Czech, whose diminutive frame means she’s unlikely to hit Barty off the court.

In her first match playing under the Aussie flag, Tomljanovic comes up against the in-form Suarez Navarro, who has enjoyed an impressive lead-up to New York with strong showings in Montreal and Cincinnati. Having won 42 matches this season, the Spaniard’s game is grooved and her confidence high. Yet Tomljanovic is definitely the kind of player who can trouble her; the Croatian-born Aussie is an explosive hitter and calm competitor, qualities that helped her upset No.3 seed Agnieszka Radwanska en route to the fourth round at Roland Garros.

Seeded for the first time at a Grand Slam singles event, Dellacqua will look to carry on her excellent form of 2014 when she faces the little-known Austrian Mayr-Achleitner, ranked 85th. Dellacqua may have lost her past two matches in Cincinnati and New Haven, yet remarkably, they are her only two first round losses for the entire season, highlighting her high level of consistency and success in the past eight months. In less than a year, Dellacqua has risen from outside the top 200 to inside the top 30, and can continue to rise higher if she sees off the Austrian. The pair have never before met.