Lleyton Hewitt has been knocked out of the ATP Rogers Cup with a straight-sets first round loss in Toronto, while Thanasi Kokkinakis battled hard before losing in three. 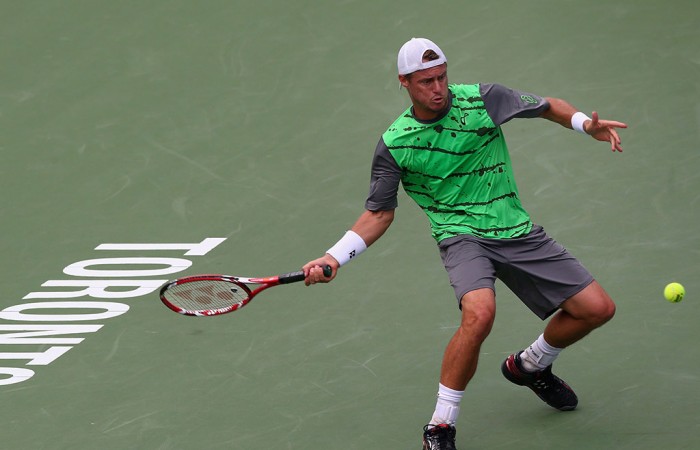 Australian veteran Lleyton Hewitt has been knocked out of the Rogers Cup in the first round with a straight-sets loss in Toronto.

The 33-year-old went down to France’s Julien Benneteau 6-1 6-2 in just over an hour and 15 minutes in rainy conditions on Monday.

In their first meeting in five years, Benneteau converted four of 16 break-point chances to snap a three-match losing streak.

Fellow Australian Bernard Tomic is due to play power-serving Croat Ivo Karlovic, whom he beat in last month’s Claro Open final in Bogota to win his second career ATP title.

Meanwhile, Marinko Matosevic withdrew from the tournament before his first match, reportedly due to a shoulder injury.

The Victorian had earned a lucky loser entry after retiring from his qualifying clash with Kokkinakis on Sunday with a similar complaint.

Tunisian Malek Jaziri has taken his place in the main draw.

Australia’s other hope, teenager Nick Kyrgios, faces Santiago Giraldo, with the winner to play eighth seed Andry Murray, who received a bye into the second round.

Marin Cilic became the first seed through to the second round as he beat Uzbek Denis Istomin 6-2 4-6 7-5, while in the day’s other completed matches, France’s Jeremy Chardy beat Argentina’s Frederico Delbonis and qualifier Benoit Paire defeated Colombia’s Alejandro Falla in three sets.

Americans Tim Smyczek and Michael Russell also advanced to the second round.