Dylan Alcott has won his first ITF Super Series crown with victory over Andy Lapthorne in the final of the British Open Wheelchair Tennis Championship at the weekend. 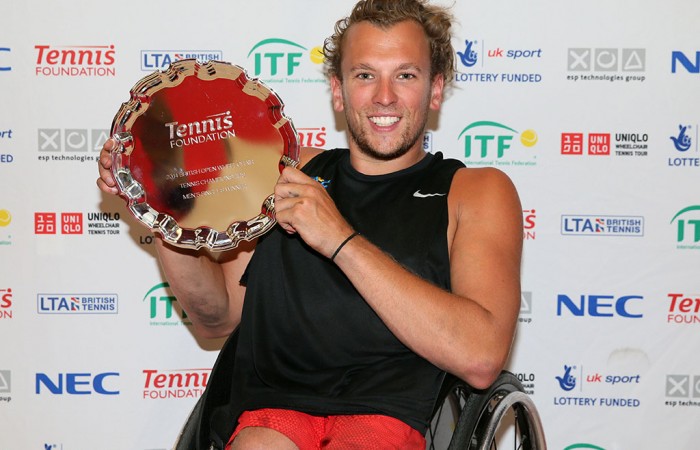 Dylan Alcott has won his first ITF Super Series crown with victory over Andy Lapthorne in the final of the British Open Wheelchair Tennis Championship at the weekend.

Alcott beat the world No.3 7-5 6-1 at the event in Nottingham, his second title since making a comeback to wheelchair tennis 12 months ago.

“To win the British Open, one of the biggest tournaments on the calendar, a year into my comeback is not bad – I’m pretty happy,” he said.

Alcott, once a talented junior wheelchair tennis player, later pursued a career in international basketball, representing Australia at two Paralympic Games and winning gold in Beijing (2008) and silver in London (2012).

The 23-year-old then took time out to travel the world before returning to tennis in late 2013.

> read more on Alcott in our exclusive profile piece

In his short time back he has already risen to world No.4, having won the New Zealand Open in January 2014 in just his second tournament appearance before losing four subsequent finals.

The British Open is one of just six Super Series events on the calendar, the level below the Grand Slams; at this year’s event play was ultimately forced indoors due to bad weather.

“I’ve come out of nowhere, but I have really trained my butt off for this.

“It was hot indoors, but after ten years of basketball I was confident that I had the strength, endurance and chair skills to get through it.”