The addition of Margaret Court Arena as a third retractable-roof stadium at Melbourne Park will officially "weatherproof" the Australian Open from 2015. 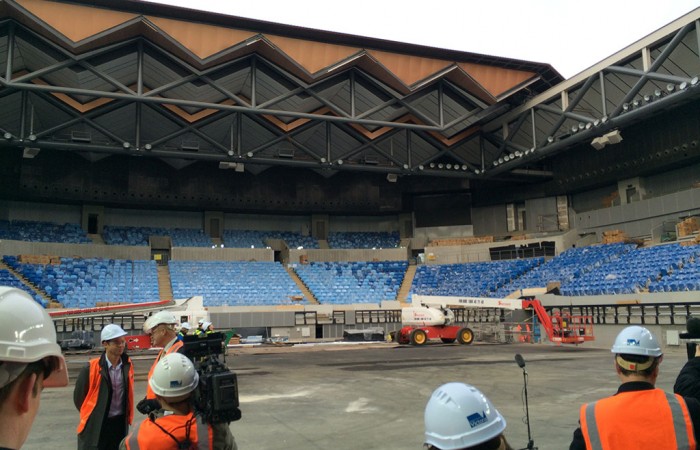 The addition of Margaret Court Arena (MCA) as a third retractable-roof stadium at Melbourne Park will officially “weatherproof” the Australian Open, according to Tennis Australia CEO Craig Tiley.

“Plans for Australian Open 2015 are well underway and we look forward to unveiling the new MCA, which promises to be one of the finest tennis stadiums in the world,” Tiley said.

New initiatives announced for Australian Open 2015 include the ticketing of MCA, with ground pass holders gaining access to more than 9,500 general admission seats at Hisense Arena.

“The retractable roof at MCA, along with ground pass entry for fans at Hisense, will ensure more fans than ever before have access to uninterrupted tennis action, whatever the weather,” Tiley said.

“The redevelopment and stadium upgrades mean we could technically complete all Australian Open matches even with a fortnight of solid rain.

“We are very proud to lead the way in world tennis as the only Grand Slam with three retractable roof venues, and MCA will feature what we believe to be the world’s fastest moving stadium roof, which will open or close in just five minutes.

“We had a taste of MCA’s intimate atmosphere this year and with an extra 2,500 seats next year it promises to be electric. We want to ensure as many fans as possible have access to the MCA matches, and by ticketing the venue patrons can plan their Australian Open experience well in advance.”

New initiatives for Australian Open 2015 include:

Margaret Court Arena, with the stunning new roof and new total crowd capacity of 7,300, is the final piece in Stage One of the Victorian Government’s $366 million redevelopment of Melbourne Park.

Additional benefits for fans include:

Stage Two of the Melbourne Park redevelopment was announced in January and includes a major refurbishment of Rod Laver Arena, a new city bridge access from Birrarung Marr and broadcast and administration buildings. The project is currently in the planning and design stage.

Australian Open ticket packages for Rod Laver Arena and Margaret Court Arena go on sale at 9am on Wednesday 1 October (AEST), with single session tickets and ground passes on sale from 9am on Tuesday 7 October. Tickets will be available from ticketek.com.au.

Australian Open 2015, presented by Kia Motors in association with ANZ, Jacob’s Creek and Rolex, will take place at Melbourne Park from Monday 19 January to Sunday 1 February 2015.