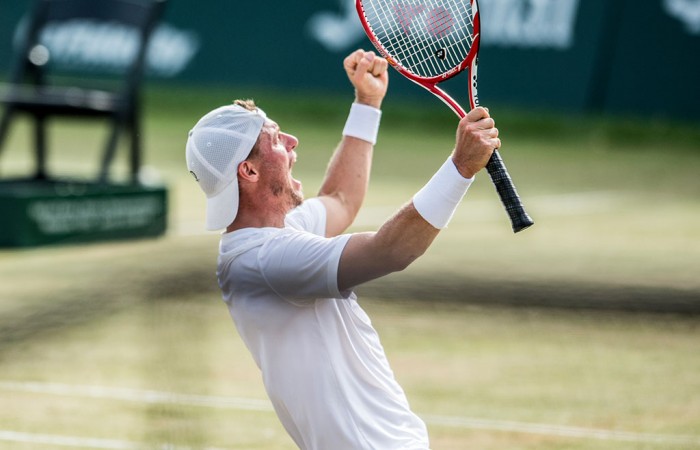 After runner-up finishes the past two years, Hewitt finally captured the Hall of Fame title on Sunday, although it took two-and-a-half hours after the Australian faltered while serving for the match in the second set and squandered two match points on Karlovic’s serve.

Third seed Hewitt won in windy conditions for his 30th career ATP title, his second of the season after a January crown at Brisbane, and an eighth career ATP grass-court championship.

It was a breakthough triumph for the former world No.1 after falling to US star John Isner in the 2012 Newport final and to Frenchman Nicolas Mahut last year.

“It was obviously very tough the last couple of years,” Hewitt said.

“Last year I served for it as well. That just makes it more gratifying.”

Hewitt has undergone five surgeries in five years to continue his career.

“We’ve had some tough times with surgeries the last few years,” Hewitt said.

“But it’s nice to know that all that hard work has paid off.”

Karlovic, 35, and Hewitt, 33, met in the oldest ATP final showdown so far this season and the oldest since the event was first staged in 1976.

In the third set, Hewitt never managed a break point but denied Karlovic three times on break points to force a tie-breaker that ended with the Aussie taking five of the final six points, the last when Karlovic send a forehand long.

“Just had to focus on what I needed to do,” Hewitt said.

“I was just focusing on trying to hold serve in the third set. It was a tough match. I was really happy to get through.”

Karlovic made his comeback from viral meningitis at this event a year ago after being in a coma and saw the runner-up effort as an achievement.

“Last year when I was in the hospital I didn’t know if I would be able to do this again,” Karlovic said.

“To be here and do this now it’s an unbelievable feeling.”

Hewitt, the 2001 US Open and 2002 Wimbledon champion, won for the second time in six meetings with Karlovic.

It marked the first time in his storied career that Hewitt had claimed the singles and doubles titles in the same week at the same tournament.

“It was good to win [doubles] with ‘Gooch’ – we’d never won a title together before. We’ve played some big matches, in Davis Cup. It was important for us to win. I’m pretty pumped about it,” Hewitt said.