Lleyton Hewitt advanced to his third consecutive final at the ATP Hall of Fame Championships by routing US seventh seed Jack Sock 6-1 6-2 on Saturday. 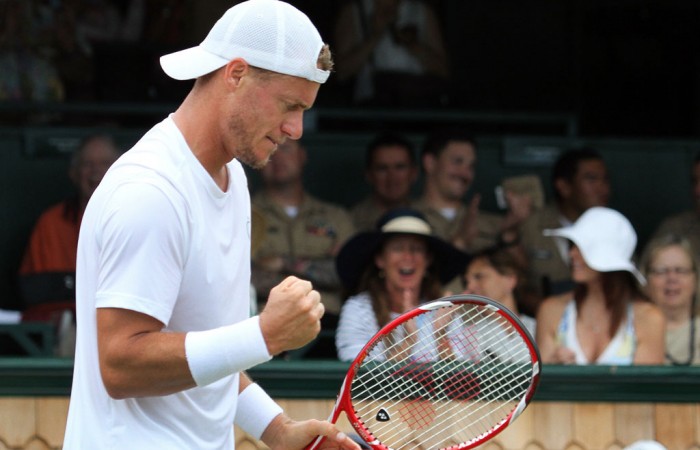 Lleyton Hewitt advanced to his third consecutive final at the ATP Hall of Fame Championships by routing US seventh seed Jack Sock 6-1 6-2 on Saturday.

The Australian third seed and former world No.1 Hewitt, who lost to John Isner in the 2012 final and to Frenchman Nicolas Mahut in last year’s title match, will try for a third time on Sunday against Croatian second seed Ivo Karlovic at the $US474,000 ($A513,000) grasscourt tournament.

Karlovic, 35, beat Australian Samuel Groth 6-4 6-4 in the other semifinal.

Hewitt, 33, seeks his 30th career ATP title and his second of the season after a Brisbane crown in the first week of the year.

Hewitt, ranked 43rd, was 7-0 in career grasscourt finals before falling the past two years at Newport.

Sock struggled from the start in his first ATP singles semi-final, which only lasted an hour.

The 21-year-old American, who never forced a break point, was coming off a run to the Wimbledon men’s doubles crown last week alongside Vasek Pospisil.

Karlovic reached his third final of the year, having lost to Japan’s Kei Nishikori at Memphis in February and German Philipp Kohlschreiber in May at Dusseldorf.

Karlovic, who fired nine aces to oust first-time ATP semi-finalist Groth after 65 minutes, has not won an ATP title since claiming the fifth of his career last July in Colombia, which ended a win drought of more than five years.

He would jump from 31st to 28th in the ATP rankings by winning the title.

Karlovic is 4-1 in career meetings with Hewitt, most notably eliminating the Aussie defending champion in the first round at Wimbledon in 2003.

Hewitt turned the tables by beating Karlovic in the first round of the 2009 French Open.