In recognition of Sam Groth's semifinal performance this week in Newport that will see him crack the world's top 100, we take a look at his major results this season that have helped him achieve this major career milestone. 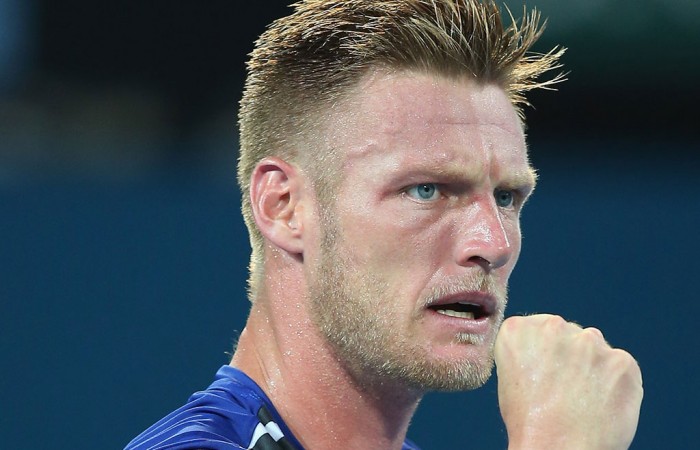 In recognition of Sam Groth’s semifinal performance this week in Newport that will see him crack the world’s top 100, we take a look at his major results this season that have helped him achieve this major career milestone.

Brisbane: as a wildcard into the main draw of the Brisbane International, Groth reached his first ever ATP-level quarterfinal with hard-fought victories over Ryan Harrison and Pierre-Hugues Herbert. His $13,335 prize was, to that date, the second-biggest tournament pay-cheque of his career. “For me to come out and make the quarterfinal in my first tour event, the first event of the year, it’s a great platform for 2014,” he told AAP. “It was a great experience to play the two matches on centre court, Pat Rafter Arena. It’s not too often at 170 in the world you’re playing night matches at courts like this.”

Indian Wells: the Victorian qualified for his first-ever ATP Masters 1000 event, winning two matches in qualifying before pushing Mikhail Kukushkin to 7-6 in the third set in the first round of the main draw.

Rimouski: Groth romped through the draw at this ATP Challenger event in Canada in March for the loss of just one set. The victory marked the biggest tournament title of his career, and boosted his ranking to a career-high of No.157. “I’m having a great start of the season. I made the quarters in Brisbane, I qualified in Indian Wells and now I just won my first Challenger,” he told atpworldtour.com.

Roland Garros: playing on his least-preferred surface, Groth won two rounds of qualifying in Paris before falling at the final hurdle to Italy’s Simone Bolelli, and would later win through to the doubles semifinals with Andrey Golubev of Kazakhstan. Although the doubles result did not count towards his singles ranking, the performance nonetheless provided valuable confidence for the Victorian that he could mix it with the best on the biggest stage. “It’s a big step forward for me,” he reflected. “It’s May and I’m going to be career-high singles and doubles (in the rankings) come Monday. For me (reaching) the last round of quallies in singles, I’ve never made that in any Grand Slam and I guess to do it on clay for me is a good effort. (Then in doubles) semifinals of a Grand Slam and playing on Suzanne Lenglen, it’s a great feeling … it’s the highlight of my career so far.”

Nottingham: Groth reached the final of this grasscourt Challenger event without dropping a set, ultimately falling to compatriot Nick Kyrgios in a hard-fought final. The week in Nottingham provided Groth with perfect preparation for Wimbledon; softening the blow of the loss somewhat was the fact that Kyrgios beat world No.1 Rafael Nadal en route to the Wimbledon quarterfinals. “I guess I shouldn’t take that Nottingham CH final loss too hard, congrats @NickKyrgios,” he tweeted after the performance that stunned the tennis world.

Wimbledon: arriving in London with a career-high ranking of No.125, Groth went on to qualify for the main draw at Wimbledon, the first time he had achieved such a feat at any Grand Slam event. The 26-year-old revealed that the inspiration behind his late-blooming success came from watching the progress of compatriot Marinko Matosevic. “I want to make this my career. I don’t want to be floating around 130, 150 (in the rankings). I want to do a Marinko – I guess what he’s been able to do over the last few years, he’s entrenched himself in that top 100 and made a real go of things.”

Newport: by winning through to the semifinals of the Hall of Fame Tennis Championships, Groth has now won 10 of his past 12 grasscourt matches and will debut in the ATP top 100 next week. It marks his best-ever tour-level result and will see him gain direct entry into next month’s US Open. “I’ve got myself in great shape,” Groth explained. “I’m not losing my mind out on court. I’m doing a lot of things better. I’ve tightened up my groundstrokes. I’m volleying better than I ever have. I’m making it tough for guys to break me. I’m becoming more prepared to be a top player.”