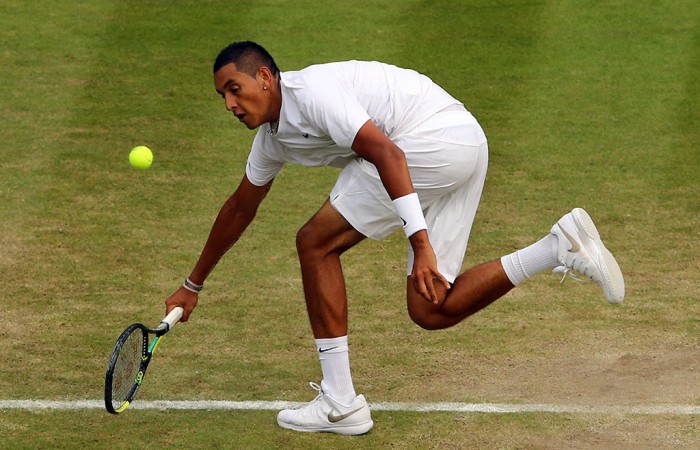 Nick Kyrgios’ dream Wimbledon debut has ended with a four-set defeat to Canadian eighth seed Milos Raonic in the quarterfinals.

The Australian teenager was unable to reproduce the heroics from his sensational fourth round upset over world No.1 Rafael Nadal as big-serving 23-year-old Raonic prevailed 6-7(4) 6-2 6-4 7-6(4) on Wednesday.

Kyrgios missed a chance to set up a semifinal against his idol Roger Federer, but the 19-year-old will still depart the All England Club having left a spectacular impression on the tennis world.

The wildcard, ranked 144th, announced his arrival as one of the world’s top young players as he became the first man to reach the last eight on debut in a decade.

Ranked outside the top 800 at the start of last year, Kyrgios’ ranking will shoot up to around world No.65 on the back of a run that also featured an upset of French 13th seed Richard Gasquet.

With Kyrgios still adjusting to the rigours of the men’s tour, there were doubts as to how he would back up emotionally and physically from Tuesday’s staggering four-set upset of Nadal on Centre Court.

He started brightly in an evening start against Raonic on Court One but his level and concentration dropped as the game wore on.

To his credit, though, Kyrgios battled hard right to the end.

Raonic, possessing what many consider the world’s best serve, belted 39 aces to 15 in a relentless display that had Kyrgios shaking his in disbelief at times.

As many had predicted between the two big-hitters, the first set was effectively a shoot off.

Kyrgios didn’t quite look at the level he did against Nadal but he again produced when it mattered.

He fended off three break points in a marathon sixth game stole the set when pouncing a rare moment of sloppiness from Raonic in the tiebreak.

After his incredible between-the-legs drop shot against Nadal, Kyrgios produced another moment for his highlight reel early in the second; down 15-30 on serve he pulled off a remarkable cross-court passing shot at full stretch.

Kyrgios went on to win the game but then went off the boil, dropping serve twice as Raonic raced through the second set.

Kyrgios responded, breaking Raonic early in the third set but it proved a false dawn for the Australian.

The Canadian broke twice to regain the ascendancy and closed to within a set of victory.

It looked like Raonic would run away with it but, in keeping with the spirit and attitude displayed by Kyrgios throughout the tournament, he tried desperately to mount a comeback.

He kept pace with Raonic in the fourth set and saved three match points in the tiebreak before the Canadian served another huge ace to finally end the Australian’s unforgettable fortnight.