Just the start for Kyrgios at Wimbledon

A life-changing fortnight at the All England Club has given Nick Kyrgios belief he can one day become a Wimbledon champion. 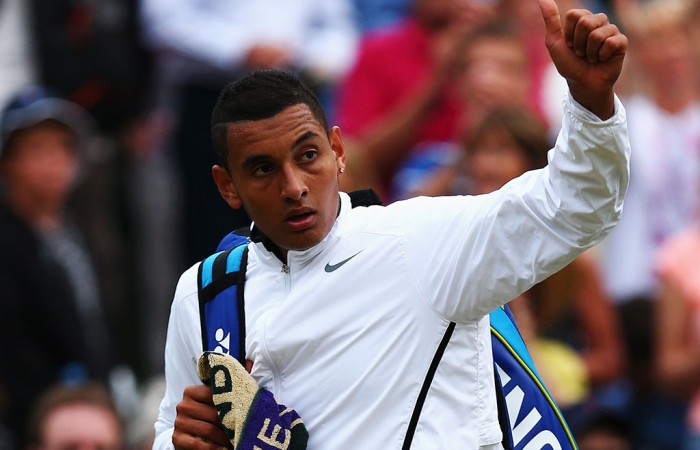 A life-changing fortnight at the All England Club has given Nick Kyrgios belief he can one day become a Wimbledon champion.

The Australian teenager’s incredible debut at the All England Club ended with a four-set defeat to Canadian eighth seed Milos Raonic on Wednesday.

It came a day after Kyrgios produced one of the greatest upsets in Grand Slam history by beating world No.1 Rafael Nadal in the fourth round.

That result had some tipping Kyrgios could contend for the title this year but the 19-year-old said his defeat to Raonic showed just how far he had to go.

“I think Milos was far better physically than I was,” Kyrgios said.

“He looked fresh by the end of the match and it was noticeable that I was struggling a little bit.

“I’m going to work on my physical side of things. I’m just going to get better in many areas. My serve can improve, forehand, backhand, volleys, transitioning. I can name millions of things that need to get improved.”

With the necessary hard work, though, Kyrgios believes he could follow in the footsteps of many great Australians to capture tennis’ most prestigious title.

“I think I’m capable of doing something like that,” Kyrgios said.

“I’m not going to put so much pressure on myself. I’m just going to do the work, do everything right. If my game continues to develop, I think, yeah, I do have a shot.”

Kyrgios had to win a Challenger event in Nottingham just to earn a wildcard entry to the main draw.

He will pocket $A432,000 and depart Wimbledon with the respect of the tennis world and a new-found notoriety across the globe.

“I’ve noticed the change, especially from yesterday to today,” said Kyrgios, who received a congratulatory tweet from Prime Minister Tony Abbott among a stack of other high-profile figures.

Kyrgios started the tournament with a career-high ranking of No.144 but will rocket as high as 66th on the back of becoming the first man in a decade to reach the quarterfinals on debut.

It means he will earn automatic entry into Grand Slam events and pick and choose the events he plays rather than battling through lower-tier or qualifying events.

“It gives me a chance to have a really good schedule,” Kyrgios said.

“It gives me a bit more clarity on the future.”