Record-breaker Hewitt in no mood to retire

Lleyton Hewitt broke the record for playing the most five-set Grand Slam matches but insisted, at 33, he felt fresh enough to carry on putting himself "through the wringer". 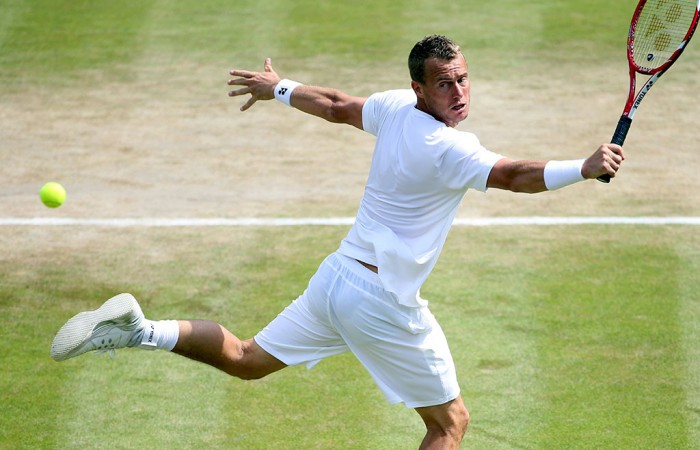 Lleyton Hewitt broke the record for playing the most five-set Grand Slam matches but insisted, at 33, he felt fresh enough to carry on putting himself “through the wringer”.

The Australian veteran, playing his 16th Wimbledon, said quitting was not something he thought about despite the exhausting toll it had taken on his body.

With his 42nd five-setter, Hewitt broke the Open Era record for the most five-set matches played at major tournaments; he previously shared the record of 41 with Andre Agassi.

“I wouldn’t have a clue on the record. I’d much rather win in three or four sets than go the distance all the time. I seem to put everyone through the wringer quite a bit,” Hewitt said.

Hewitt waved goodbye to the Wimbledon crowd but said he didn’t know if it was adieu or just au revoir.

“You never know. I’m one injury away from hanging up the bats at any time. Obviously, you appreciate the support out there,” the world No.48 said.

“When you’re out there in battle, you’re doing what comes naturally to you – nothing changes. I’m focused on every single point. As soon as anything else starts entering your mind, you might as well walk inside – you’re done.

“I’m playing for my own reasons. I know when I play my best tennis, I can still go out there and push guys, especially on this kind of surface over five sets.

“I still enjoy it. I still enjoy doing the hard work – for moments out there like this – to play five-setters against the best guys in the world.

“In some ways, the last couple years, I’ve been grateful I’ve been able to come back, especially after the last surgery where I didn’t really think I’d be able to go out there and compete against the guys again.

“There’s satisfaction in doing that.”

Hewitt, 33, was contesting his 61st grand slam. He is joint second with Agassi and Roger Federer on the list of the most Grand Slams played in the Open Era, behind Fabrice Santoro on 70.

Janowicz, who is 10 years younger, was in no doubt the Australian should carry on.

“Lleyton Hewitt is really dangerous. He’s a really, really good player. It doesn’t matter how old he is. In my opinion, he will not finish his career like this. He will still play at least two more years,” he said.

“I hope I will not play against him any more.”