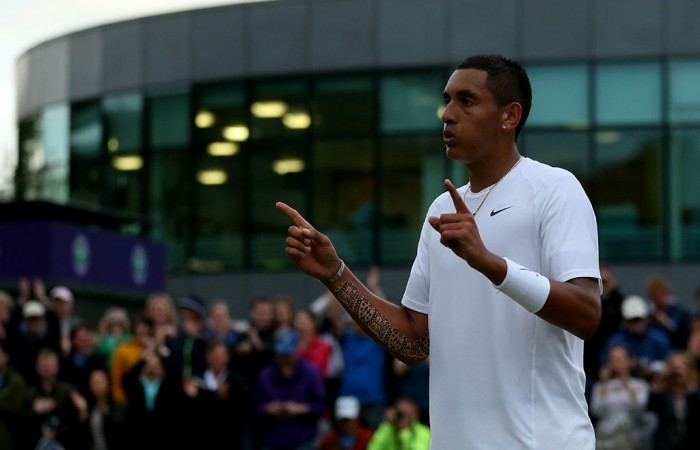 Australian teenager Nick Kyrgios has extended his remarkable Wimbledon debut into a dream last-16 showdown with world No.1 Rafael Nadal.

And the confident 19-year-old believes he’s capable of causing one of the All England Club’s greatest upsets in the biggest match of his life on Tuesday.

Wildcard Kyrgios, the youngest man in the draw, rebounded from the high of his incredible win over Richard Gasquet to beat 68th-ranked Czech Jiri Vesely 3-6 6-3 7-5 6-2 in a rain-interrupted third-round match on Saturday.

The last Australian left standing in singles at the All England Club, Kyrgios will now face the 14-time major champion Nadal in the sort of match he’s dreamed about since first picking up a racquet.

“Obviously 14 grand slams between us, so it’s going to be a good match,” Kyrgios joked.

“Making my fourth round at a grand slam and the opportunity to play Rafa, hopefully on Centre Court, it’s an opportunity I’m just going to embrace.

“I never thought I would be seeing Nadal in my fourth round Wimbledon in my 19th year. I thought it would take years and years of work to finally have an opportunity like that.

“To think that it’s going to happen in about a day is daunting, but so exciting as well.”

Nadal, Wimbledon champion in 2008 and 2010, reached the fourth round for the first time since 2011 with a four-set win over Kazakhstan’s Mikhail Kukushkin.

However he has shown some vulnerability, losing the first set in all three of his matches so far.

“Of course I have nothing to lose out there. Anything is possible. I’m just going to go out there and play my game. I think that’s definitely enough to be competitive.”

Asked if he had belief he could even cause an upset, Kyrgios replied confidently: “yeah”.

Kyrgios’ win also ensured he will break into the world’s top 100 for the first time, a remarkable feat considering he was ranked lower than 800th at the start of last year.

The Australian showed no signs of an emotional or physical hangover from Thursday’s incredible win over 13th seed Gasquet, in which he fought back from two sets down and saved nine match points, again coming from behind to clinch victory.

Kyrgios trailed 4-2 when play was called off due to more rain and the players had to wait four-and-a-half hours for a resumption.

The Australian failed to prevent 20-year-old Vesely closing out the first set but he dominated the match from there.

He banged down 26 aces and increasingly found ways to break down left-hander Vesely’s huge serve.

After the pair traded breaks in the fourth set, Kyrgios forged clear impressively, finishing the match off with a big serve and dropping to the ground in a Nadal-esque celebration.

“I think the rain delay played a massive part in that match,” Kyrgios said.

“He had a lot of momentum … I thought I played some really good tennis in the last three sets.”

“Young players are very dangerous as always they have something special,” Nadal said.

“They are able to play with no pressure. They are fresh.”