UPDATE: A vintage Lleyton Hewitt fightback has come up short as the Australian veteran fell in five sets to Polish 15th seed Jerzy Janowicz at Wimbledon. 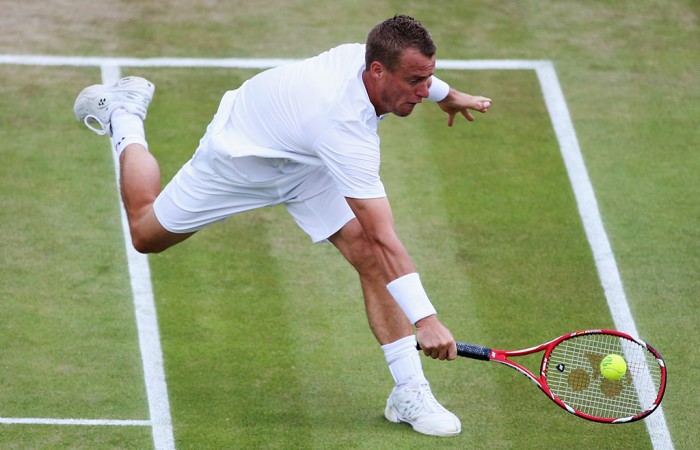 Like he has so many times in 16 campaigns at the All England Club, Lleyton Hewitt displayed his great fighting qualities in coming from two sets down to push Polish 15th seed Jerzy Janowicz to the limit.

Perhaps symbolic of an imminent changing of the guard, Hewitt’s departure left 19-year-old Nick Kyrgios as the sole Australian left standing in singles at Wimbledon.

Hewitt gave a wave to crowd as he departed Court No.2 after an emotion-charged four-hour match played over two days.

The 2002 champion said he wasn’t sure if it was farewell gesture or simply a ‘see you next year’.

“I don’t know. You never know,” said Hewitt, who has defied a torrid run with injuries to prolong his career.

“I’m one injury away from hanging up the bats at any time. Obviously I appreciate the support out there today.”

Hewitt saved two match points in the third set before mounting a gutsy comeback to set a new Open era record of most Grand Slam five-set matches played with 42.

Despite winning 26 of them – the second most five-set wins behind Pete Sampras – it isn’t a record Hewitt is particularly thrilled with.

“I’d much rather win in three or four sets than go the distance all the time,” Hewitt said.

“I seem to put everyone through the wringer quite a bit.”

Hewitt trailed 7-5 4-4 when play resumed on Friday after rain had suspended play on Thursday evening.

He struggled to match the explosive power of Janowicz, a semifinalist last year, dropping serve in the first game of the day and quickly falling two sets behind.

Hewitt battled hard to hold his service games in the third set, becoming increasingly vocal and animated as he tried to pump himself up.

He look destined for a straight-sets defeat after falling behind in the tiebreak but saved two match points.

The first was a gifted Janowicz double-fault and the next a brave backhand winner down the line.

Hewitt converted his second set point, celebrating wildly as he urged the crowd to get behind him.

Combining his incredible work ethic with great decision-making and touch, Hewitt clinched a deserved break in the fourth set and served well to level the match.

But despite carrying all the momentum into the deciding set, Janowicz regained control of the match as his huge serves and booming forehands started to stick again.

Janowicz served for the match at 5-1 but, in typical never-say-die fashion, Hewitt broke back once again.

A second break proved a bridge too far, however, as Janowicz served it out comfortably on his second attempt.

“Even though I felt like I was starting to turn the match around throughout the fourth set, you’re only sort of a few points away from him opening it again and that’s what happened.”