Bernard Tomic has been unable to make the most of a bright start against sixth seed Tomas Berdych, falling to the Czech in four sets on No.1 Court. 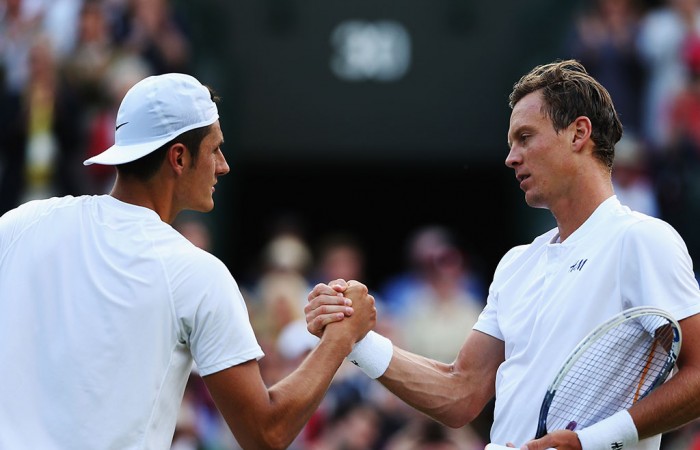 Bernard Tomic has been left to rue another Wimbledon opportunity missed after falling to Czech heavyweight Tomas Berdych for the second straight year.

The 21-year-old Australian also took a set off Berdych when he lost in the round of 16 last year and felt he again failed to capitalise with his opponent on the ropes.

Only a late lapse cost Tomic the second set on Wednesday while he missed two set points in the third.

The result means Tomic is set to fall out of the world’s top 100 after failing to back up his run to the fourth round last year.

He has fallen in the rankings having struggled to regain his form since hip surgery in February, though he produced some encouraging results in the lead-up to Wimbledon.

“I tried my best and it’s only my sixth, seventh tournament back,” Tomic said.

“It’s disappointing but (Berdych) is a very good player on grass, for me probably the top three or four to play on grass, so it’s difficult.”

There was a worrying moment when Tomic tweaked his hip in the second set, forcing him to seek medical advice, but he’s confident it’s nothing that will threaten his US hardcourt campaign.

“I was scared (when it happened) but luckily it’s not going to be anything serious,” Tomic said.

Berdych was dealing with a painful wrist problem during the match, but Tomic was causing him the biggest headache.

“(He) was the first and the biggest challenge that I was facing today and he was very good,” Berdych said.

“Especially in the first three sets where he was pushing me really hard and giving me a really hard time.”

Tomic said he would take a short break before returning to competition at next month’s hard court event in Washington.

With few rankings points to defend in the US, he hopes to return to the top 50 by the end of the year.