Groth back from the tennis brink

A new-found focus and work ethic since returning to tennis has led Sam Groth to career-high ranking of No.125 and a Wimbledon main-draw debut on Monday. 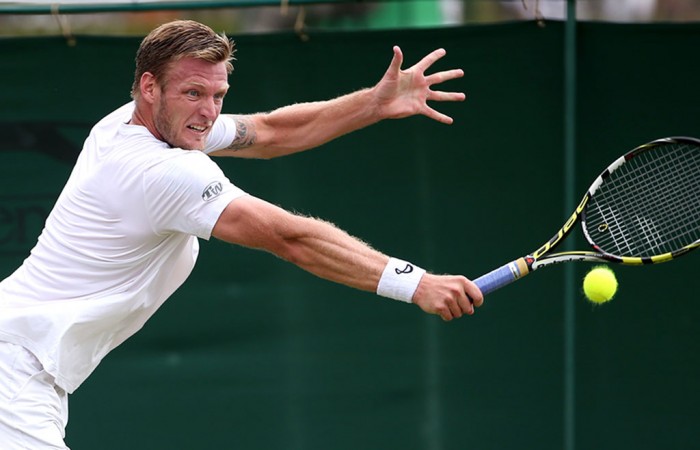 When Sam Groth decided to give his tennis career another shot, he knew “half-arsed” wouldn’t cut it any more.

Dealing with off-court issues and struggling with form and fitness, Groth almost gave the game away in 2011.

Wanting to be anywhere but on a tennis court, the talented 194cm athlete turned his attention to Australian Rules football, playing with suburban Victorian side Vermont Eagles.

But the lure of individual competition eventually brought Groth back and, three years on, a new-found focus and work ethic has led him to career-high ranking of No.125 and a Wimbledon main-draw debut on Monday.

“I stopped tennis. I didn’t want to play, I didn’t want to be around it or do anything at the time,” said qualifier Groth, who will face Ukrainian 21st seed Alexandr Dolgopolov in the first round.

“I feel like people would have written me off and said that I’m never a chance to get inside the top 100 and now I’m probably one or two wins away from being there.”

Under his coach Ben Mathias, Groth has put paid to the bad habits that hampered his progress in the past; learning to be more professional off the court has helped the 26-year-old break new ground on it.

“A day off is not sitting at home in front of the TV eating junk food any more,” Groth said.

“Not that it was ever that bad but it’s just about every single day applying myself now.

“That’s been the biggest change, making tennis – as much as I enjoy it – my job at the same time.”

World No.19 Dolgopolov represents a tough first-round assignment for Groth but the Ukrainian has been under an injury cloud, forced to withdraw from the Queen’s Club quarterfinals due to a thigh problem.

Groth is predicting a “flashy” match with few rallies, particularly if he can get his much-feared serve firing.

The Australian holds the unofficial world record for the fastest serve in history, a 263kph bomb in a Challenger event in South Korea in 2012.

Serving has been the cornerstone of his recent success, having not been broken in 18 sets of tennis before his final-round win in Wimbledon qualifying.

“It is something I’m still working on every day but you can’t just rely on stepping up and hitting big serves,” Groth said.

“It’s what you do after that.”