Bernard Tomic has salvaged enough from a mixed Wimbledon preparation to feel like he can be a threat again at the All England Club next week. 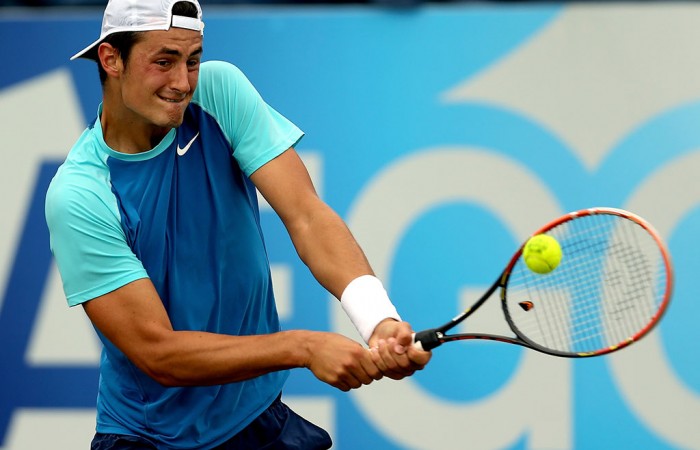 Bernard Tomic has salvaged enough from a mixed Wimbledon preparation to feel like he can be a threat again at the All England Club next week.

The tournament has yielded the best Grand Slam showings of Tomic’s career, including reaching the last 16 a year ago and the quarter-finals in 2011.

A similar run this year was looking highly unlikely as Tomic struggled to regain his form following hip surgery in February, but the 21-year-old’s performances in recent weeks suggest he’s heading back in the right direction.

The Australian also reached the second round at Queen’s Club last week before losing 7-6 7-6 to Czech veteran Radek Stepanek, who went on to beat defending champion Andy Murray.

“It’s similar to last year. I lost first round at Queen’s and made the quarters (at Eastbourne) and then I felt good playing Wimbledon. Confident and strong.

“I’m happy with the way it’s been going and who knows? Wimbledon is my favourite tournament so if I can get a good draw, the first and second round will be very important for me.”

Tomic made his first Wimbledon main draw appearance as a 17-year-old in 2010 and no place in the tennis world is more special to the Queenslander.

“It’s one of the most prestigious tournaments we have in sport,” Tomic said.

“I have just felt comfortable there over the last three, four years and it brings out the best in me.”

Tomic will hit the practice courts in coming days and said his focus in training would be on being more aggressive, feeling like he was letting his opponents off the hook on break points.

“You’ve really got to play to win rather than not to lose on those big points,” Tomic said.