UPDATE: Lleyton Hewitt and Bernard Tomic found their Wimbledon preparations cut short by a pair of veterans in the second round of the ATP event at Queen's Club. 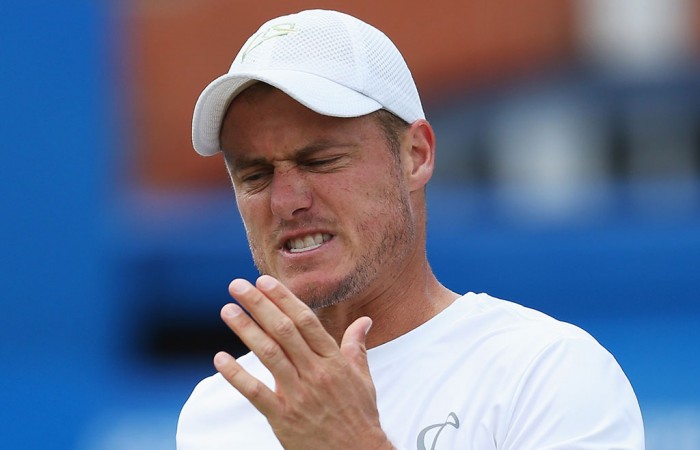 Lleyton Hewitt and Bernard Tomic remain upbeat ahead of Wimbledon despite their preparations being cut short at Queen’s Club.

Hewitt, a four-time champion at the London grasscourt event and a semifinalist last year, fell 6-3 6-4 to Spaniard Feliciano Lopez in the second round on Wednesday.

He was followed out of the tournament by Tomic, who fought hard but lost 7-6(4) 7-6(5) to tough Czech veteran Radek Stepanek.

The losses left Marinko Matosevic as the last Australian standing at Queen’s.

He defeated Slovakian Lukas Lacko 7-6 (7-3) 6-3 to set up a third-round encounter with fifth seed Jo-Wilfried Tsonga on Thursday.

Hewitt had never lost to Lopez in four previous meetings, including their only other encounter on grass at Wimbledon in 2005.

However he was always on the back foot as tenth seed Lopez dropped just five points on serve in the first set.

“I didn’t feel like I did a lot wrong with the returns out there today. He served really well for the whole match,” Hewitt said.

Hewitt will now shift his focus to training ahead of Wimbledon, where he claimed his second major title in 2002.

At 33, Hewitt still feels he can trouble the big guns at the All England Club and he wasn’t overly concerned by Tuesday’s defeat.

“I feel like, for the most part, my rhythm is pretty good,” he said.

“I’ll play some practice sets over the next week-and-a-half and just get more and more comfortable with the grass. Then, over five sets, anything can happen.”

The 21-year-old has struggled to regain his form following hip surgery in February but won his first ATP main draw match in five months against American Tim Smyczek in round one.

“Today was a good match, it could have gone either way,” Tomic said of the Stepanek defeat.

“I was happy I fought and showed a bit of heart out there being down a break in the second.”

The world No.82, who reached the last 16 at Wimbledon last year, will head south to Eastbourne in a bid to qualify for the ATP event there next week.

“Hopefully I can play well, qualify and win some matches in the main draw,” Tomic said.

“And then for the big one at Wimbledon. We are all getting ready for that one so hopefully I can play as best as I can there like I always do.”