Barty: ready to take on the world

Having scored a Roland Garros wildcard in her first unrestricted season as a professional, the sky is seemingly the limit for Aussie talent Ash Barty. 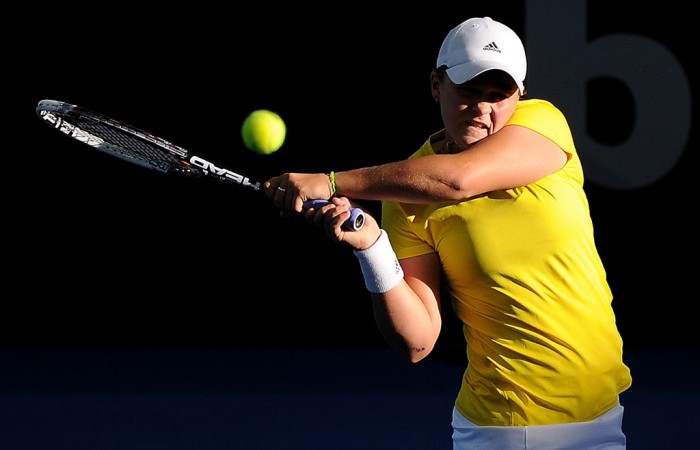 Having recently turned 18, the sky is seemingly the limit for Australian tennis talent Ash Barty.

Now free of the shackles that come with age restrictions on the women’s tour and steadily improving her game and physicality with each passing day, the Queenslander will have another reason to enjoy this new and exciting period of her career thanks to a wildcard entry into the main draw at Roland Garros.

The claycourt Grand Slam begins in less than a fortnight’s time, and Barty believes she’s well positioned for success at the tournament that last year signalled her first true breakthrough on the big stage.

“It’s part of the season we have to play for a couple of months. I think in the end you have to learn to love it otherwise you’re never going to have success on it … (I enjoy) sliding around and trying to play a few different shots and whatnot.

“Hopefully I can recreate the success I had at the French last year and yeah, try to get another win.”

Last year in Paris, the then 17-year-old upset Czech stalwart Lucie Hradecka – a player ranked almost 100 places above her at the time – to advance to the second round at a major event for the first time. The result followed a winning singles debut for Australia in the Fed Cup against Switzerland, and preceded a run to the second round at Flushing Meadows, part of a streak that helped her hit a peak ranking of No.129 in September 2013.

Progress since then has been slow and steady rather than spectacular; having been ranked inside the top 200 for around 18 months, the young Aussie has slipped from that high in September to her current mark of 182nd.

But as is so often the case, players with a game as multi-dimensional and varied as Barty’s take a little longer to develop. And there’s also been the conscientious move by she and coach Jason Stoltenberg to play a lot of qualifying draws and ITF events, a route that will afford plenty of valuable match play but less ranking points.

“Stolts and I have made a decision that we’re going to play a lot of quallies this year and try and get a lot of matches. It’s been great so far … I’m getting the matches that I want and the results we were looking for, so now it’s just a matter of making sure we pick the right tournaments that we want to play,” she said back in February.

So far in a season that will mark her first full schedule on the professional circuit, there’s been plenty to be impressed about.

Barty has qualified for four events already – including WTA tournaments in Brisbane and Acapulco – as well as contesting the main draw of the Australian Open and continuing to successfully represent Australia in Fed Cup play. They’re results that have seen her compile a 15-6 win-loss record in 2014, and win 11 of her past 15 matches.

“Brisbane was a real high for me, qualifying and winning my first round was amazing,” she reflects.

“I had the opportunity to play Maria (Sharapova) but I had to withdraw, but that week to start the year was just perfect for me. Even at the Australian Open, having that opportunity to play Serena (Williams) on Monday night at the first Slam of the year was something really special …  I got smashed, but that’s OK, I really enjoyed it. I did the best that I could and we just work on from there.

“Now I’m over here in Europe already playing a few good matches, so it’s been a really solid start to the year for me.”

Part of her comfort at the top level, especially since that result at Roland Garros 12 months ago, has been her regular exposure to big match tennis and stadium courts.

In addition to her appearance in Grand Slam main draws and Fed Cup, there’s also been her outstanding doubles partnership with compatriot Casey Dellacqua; in 2013 the pair reached three Grand Slam finals, meaning that Barty spent plenty of time facing seasoned pros and getting used to the pace of elite-level tennis, accumulating valuable experience along the way.

Watching Dellacqua’s stunning start to 2014 has also served as an injection of inspiration.

“I’m really pumped for her and it’s been awesome to see her win a few matches. I’m looking forward to seeing her again next week (at the WTA event) in Strasbourg and getting into doubles (together) at the French,” Barty says.

“One day hopefully I can achieve the same things that she’s doing now, and you know I’ll be a very happy person.”

Given the results she’s already notched in her teenage years, Barty could well go on to achieve even more as her career unfolds.

As an 18-year-old, she no longer faces a cap on the number of professional-level tournaments she can enter, knowledge which she says makes her feel like she can “really give it a crack”.

“Once you do hit 18 it is a little bit of a milestone … (you’re) really ready to take on the world in a way and I feel like I’m still working to get there.

“But I’m happy with where I am at the moment and I’ve had some good success so I’ve just got to keep knuckling down and working hard and I’m sure I’ll get the results that I want.”