A flourishing partnership with Australian coach Roger Rasheed and a dash of ANZAC spirit helped Grigor Dimitrov claim his second title of 2014 in Bucharest. 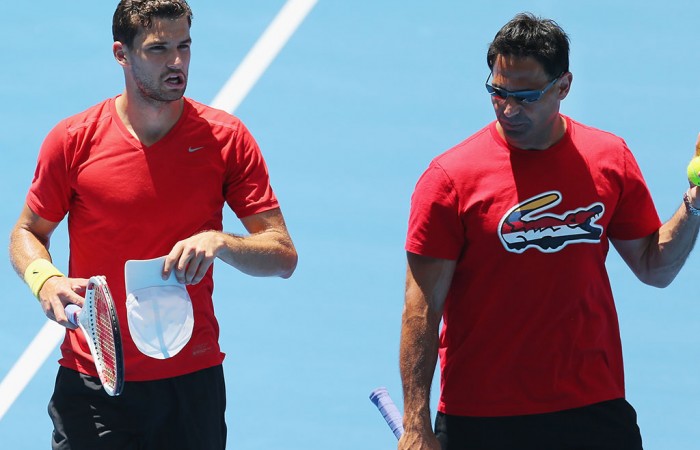 The influence of Australia was strong for Grigor Dimitrov as he marched to the title at the BRD Nastase Tiriac Trophy in Bucharest over the weekend.

The 22-year-old didn’t drop a set en route to his second title of the season, beating Czech Lukas Rosol 7-6(2) 6-1 for his third career ATP title.

“I have worked really hard to start winning titles. I have put in enough effort, time and sacrifices to get here,” said the 22-year-old, who on Monday rises to a career-high ranking of world No.14.

That hard work can be traced back to his partnership with Roger Rasheed, the Australian coach renowned for his work ethic, discipline and emphasis on supreme physical fitness.

In their short time together, the Bulgarian has elevated his game to a new level, capturing all three of those career tournament victories, winning 29 of his past 35 matches and slashing his ranking from No.28 in October 2013.

It’s a partnership that has borne fruit from the get-go; in their very first event working together, Dimitrov captured his maiden career title at the ATP event in Stockholm, defeating then-world No.3 David Ferrer in the final.

“I’m happy that I have Roger on my side,” Dimitrov revealed in a recent interview with Australian Tennis Magazine.

“He’s definitely emphasising a lot of fitness. He’s also doing a tremendous coaching job on the court. We’ve only been together for [six] months, and obviously we need to spend more time together. Everything else like confidence in matches will come [increase] with every tournament we’re together. We want to make the most out of every day.

“One of the first things Roger mentioned to me was not to play crazy, low-percentage trick shots. I thought there was no point in arguing with him about that or his banning the pink tennis shoes I had been wearing. I was getting some flak from people for those pink shoes anyway [laughter].”

Despite his no-nonsense approach, Rasheed nonetheless displayed some sentimentality following his charge’s victory in Bucharest.

The South Australian proudly tweeted a photo of Dimitrov hoisting the champion’s trophy and shed light on a conversation the pair had prior to the title match.

“Nice work @GrigorDimitrov – told him about the Anzacs & what the weekend meant in Australia so he walked on court with a little Aust pride,” he tweeted.

It certainly helped; Dimitrov took to the red clay court in Bucharest for the final and produced a sublime performance that left even his opponent gushing.

“Grigor was just amazing today. I played good tennis, but Grigor was better on the court and I had no answer,” Rosol said.