UPDATE: Germany is through to its first Fed Cup final in 22 years after Angelique Kerber downed Australia’s Sam Stosur in three sets in the Fed Cup semifinal in Brisbane. 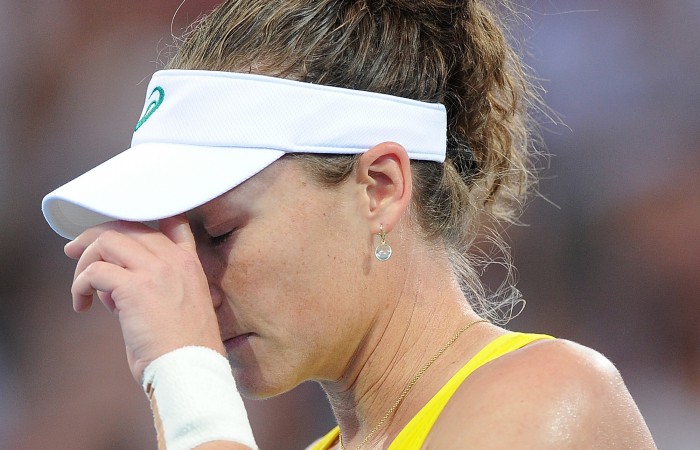 UPDATE: Germany is through to its first Fed Cup final in 22 years after Angelique Kerber rebounded to take down Australia’s Sam Stosur in three sets in the Fed Cup semifinal in Brisbane.

The world No.7’s 4-6, 6-0, 6-4 victory ensured the Germans had an unassailable 3-0 lead and left 19th-ranked Stosur without a win from her two singles matches at the weekend.

The fourth singles rubber was not played, however Australia’s Casey Dellacqua and Ashleigh Barty combined to defeat Anna-Lena Groenefeld and Julia Goerges in a dead doubles rubber, 6-2, 6-7(5), 10-2.

Stosur started the first match of the day in a canter, working her heavy forehand to surge to 3-0 before the German would get on the board.

She would go on to close out the first set 6-4 with a forehand pass up the line after 49 minutes.

It was a far more assertive start than she was able to conjure in her opening match on Saturday against Andrea Petkovic.

The second set was a over in a blink, Kerber breaking the Australian’s opening service game and never letting up, taking it 6-0 after just 23 minutes.

A marathon game at 1-1 in the decider almost took half as long as the entire second set. Kerber broke Stosur after eight deuces and more than 15 minutes of play before securing a double break to serve for the set at 5-2.

With her back to the wall, Stosur produced more of the imposing play she was able to produce in the first set, breaking to love.

Kerber would seal it second time around with an ace to book Germany’s first Fed Cup final berth since the team won it in 1992.

For Stosur it ended a disappointing weekend playing before her home crowd, however her performance on Sunday left her with some positives.

“Overall, I’m reasonably happy. I guess it always takes a lot off when you don’t get through the match, but I started out great, I lost my way a little bit at the start of that second set, and then she really, I think, started timing the ball a bit better, and that combined with my little bit of waywardness at the start certainly didn’t help that second set,” Stosur said.

“I thought the third set was a high level again and really happy with the way that I played and it came down to one break, which could be that really long game where I obviously had chances to try and win it, and that’s I guess what it can come down to when you’re playing a top 10 player.’’

It capped a hugely successful weekend for Kerber after her 6-1, 6-0 drubbing of 53rd-ranked Casey Dellacqua on Saturday.

The Germans will go on to face either the Czech Republic away or Italy in a home final.

The Czechs held a commanding 2-0 lead in the second semifinal overnight.

With Stosur missing her traditional French Open warm-up event in Stuttgart this week due to her Fed Cup commitments, the Australian said she would take a few days off before beginning her claycourt campaign.

She would leave Brisbane with some positives that her game was moving in the right direction, despite the two losses.

“I was able to stay up on the baseline better and take advantage and be moving forward,” she said. “I think my first serve was pretty good. I still want to improve my second serve in a few different areas, but overall I thought today was better than yesterday, so that’s something to take away that I can keep building on.”