This article featured in the March 2014 edition of Australian Tennis Magazine, subscribe now!

Jimmy Connors once described tennis as being “90 percent mental” and never is that statement more true than when it comes to the tiebreak, tennis’ version of a penalty shootout. It’s the ultimate test of nerve and often proves to be make or break time for a club player, decisively shifting the course of a match one way or the other.

For the professionals, tiebreaks are fairly routine occurrences, especially in the men’s game where serve holds sway more often than not. John Isner contested a whopping 56 tiebreaks during 2013, an average of at least two per tournament, and he feels that you have to relish the challenge.

“I always head into a tiebreak thinking that I like my chances, no matter who I’m playing,” he says. “I tell myself that mentally, I have the edge.”

One could argue that it’s easy to be positive when you’ve got a weapon like the Isner serve at your disposal but for the best in the world, the margins are so slim that you have to be aggressive, both on the court and in your mind.

I always try to attack in a tiebreak whatever the situation because that’s my game.

“Every pro player has his own way of dealing with a tiebreak, it’s one of the most important things in tennis,” says Australian Open quarterfinalist Grigor Dimitrov, who learned that in the most painful way possible in Melbourne, where he missed an opportunity in the tiebreak of his Australian Open match against Rafael Nadal with a wide forehand on set point.

“You never know what’s going to happen, sometimes one shot can change the whole momentum of the tiebreak so you’ve got to be prepared for that. But you have to have a positive mind-set and really believe you’re going to win it. At the end of the day you’d rather go for your shots and then you can sleep easy at night rather than wondering what might have been.”

Once upon a time, the strategy of many WTA players might have been to try and moonball their way through a tiebreak, forcing the other player to come up with the goods. But not anymore. In today’s game, most girls in the top 100 have the power to blast big winners, exemplified by the now-retired Marion Bartoli whose fearless hitting carried her all the way to the Wimbledon title last summer.

“Normally it’s the person who is trying to attack who will have the advantage in a tiebreak,” she says. “I’d say that 80 percent the time, the player who is dictating will win it. But it’s really important to concentrate and be focused on every shot. You can’t afford to make silly unforced errors as one point can decide it. Just try to keep things as simple as possible and don’t go for anything too rash.”

For Poland’s Jerzy Janowicz, his height forces him to take the initiative. Janowicz stands at a towering 203 cm and while he covers the court with frightening speed and athleticism for someone so tall, he feels that he can’t afford to sit back and play it safe.

“I always try to attack in a tiebreak whatever the situation because that’s my game,” Janowicz explains. “I can’t afford to play too defensively because I can’t get back into position as quickly as some of the other players so I have to look for the big shots and go for them. If you’re a taller player and movement isn’t your strong point then that may be the right strategy for you.”

While Janowicz’s arm-juddering power means that the match is more often than not on his racquet, some feel that it’s important to balance the need for attacking tennis with an analysis of the match situation. Once described as “aggressive to the point of psychosis” by Andy Roddick, Alex Dolgopolov is one of the game’s most unorthodox and exciting shotmakers. However even Dolgopolov is keen to sometimes temper his liking for the spectacular when it comes to the crunch points in a tiebreak.

“A tiebreak’s pretty much a lottery but how I approach it depends a lot on the match situation and how my opponent’s playing,” he says. “For example if I’d served for the set and then he came back, I would probably be more aggressive. If he was playing average and making quite a few mistakes then I would wait a bit and be more patient.

“For club players, if you’re up against someone who’s better than you, I’d actually suggest being more aggressive because they’ll be thinking they’re supposed to win and that will put them under more pressure. But the first point is really important. You have to start well because it’s tough if you lose a few mini-breaks.”

‘Focus’ is a buzzword that comes up time and time again when the pros discuss the dynamics of the tiebreak. Magnus Norman, who coached Stanislas Wawrinka to the Australian Open 2014 title and the world No.3 ranking, advises players to look after your own serve.

“Stay positive and try to take charge of the rallies,” he says. “The first points are extremely important so if you can get off to a quick lead like 3-0 or 4-1, you have a huge advantage. The most important thing is to focus on every single point especially on your serves as those points are the most vital.

“Concentrate extra-hard on winning those points and then wait for the opportunity to strike some good returns. If you’re winning your service points comfortably, they’re going to be under even more pressure.” 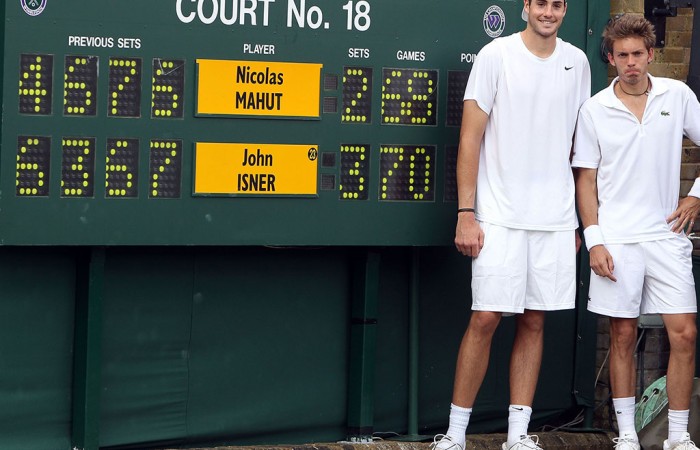 A former world No.4 and past coach to Andre Agassi, Andy Roddick and Andy Murray, Brad Gilbert knows a thing or two about the mental side of the game and his bestselling book Winning Ugly unlocked many of the secrets to being a better competitor. He suggests that club players use mind games to relieve some of the pressure.

“Call the tiebreaker just another game,” Gilbert urges. “For so many club players, it’s the pinnacle and if they don’t win it then an hour is gone to waste and they’re mentally spent. They tend to think more about what could be lost as opposed to taking it one point at a time and focusing on what’s actually happening out there.”

While you can learn many valuable lessons from watching the pros, Gilbert says that knowing your own limitations can make the difference between winning and losing.

“If you try and emulate someone like Janowicz, it might not apply to your game,” he said. “It might not be sensible. Sometimes it might be wise for a club player to go for his shots, because of the way they play. But play to your strengths. If you do have a really good forehand, then the tiebreak’s the time to use it. If your weakest shot is your second serve, and you normally just plop it in and are at risk of double faulting, you need to take that out of play. Take something off your serve and make first serves. You might not win but at least don’t lose with a shot you generally have trouble with.”

“Tiebreaks are decided on unforced errors more than anything else so chasing the winner can get you into trouble. Let your opponent beat you, so make returns. I don’t care if they’re down the middle but give me a wide margin of error. Don’t try to hit winner returns on the second serve and give away cheap points. I always tell club players, ‘You don’t get three points for a screaming winner!’ For players at this level, it’s more about trying to let the opponent beat himself.”

>> The first point is critical

>> Focus on your own serve

>> Wait for the opponent’s error

>> Play to your strengths