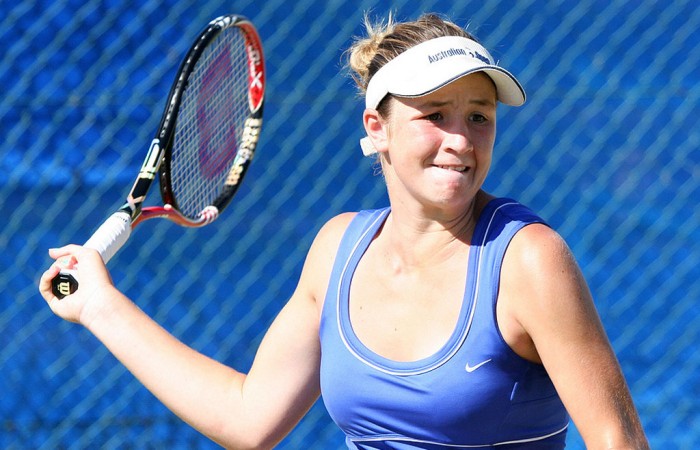 “Nicole, Chloe and Petra have been working hard the past year on the ITF circuit and their dedication continues to pay off. This will be a great experience for them,” said Milo Bradley, National Academy Head Coach – SA.

Australian No.38 Collie, will be looking to make inroads this year after being awarded her second straight main draw wildcard at the City of Salisbury Tennis International.

Collie has been travelling on the Pro Tour circuit over the past month, with qualifying draw appearances at the $50,000 Bernie and Launceston tournaments. At the end of 2013, she won the Just 4 Tennis New Years Open AMT and followed that up as a semifinalist at the 2014 City of Salisbury Platinum AMT just a week later.

The City of Salisbury Tennis International will be 16-year-old Chloe Hule’s first time competing in the main draw event of an ITF Futures tournament.

She has competed in the qualifying of four ITF Futures events in the past and has had some outstanding results on the ITF junior circuit of late, with an appearance in the Australian Open Junior Championships in January.

For 14-year-old Petra, the City of Salisbury Tennis International will be just her third ITF Futures event and first main draw appearance at this level.

She is coming off the back of an appearance at the Australian Open Junior Championships and fabulous results on the ITF Junior Circuit, after making the final of the Wilson Tennis Canterbury ITF and the quarterfinals of the 2014 Technifibre Tennis Centre Championships. Locally, she reached the quarterfinals at the City of Salisbury Platinum AMT early in January.

Riding high on confidence, the younger of the Hule sisters will be looking to continue her success here at the City of Salisbury Tennis International.

The fourth wildcard was awarded to Australian No.44 Samantha Harris from Victoria.