In the lead-up to this weekend's Fed Cup World Group first-round tie versus Russia, the highly rated Australian team is not taking any chances. 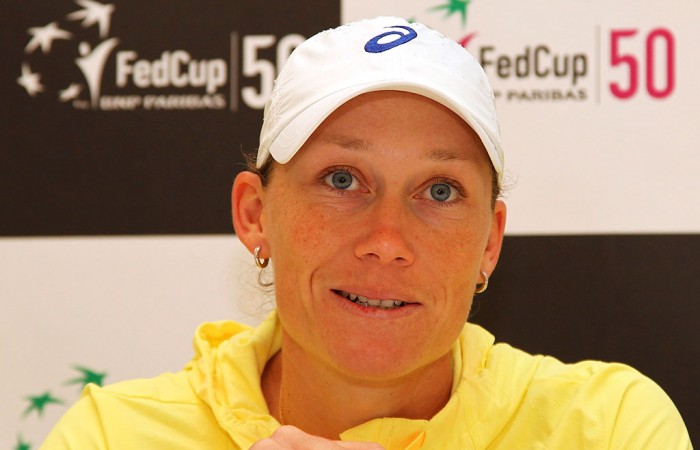 In the lead-up to this weekend’s Fed Cup World Group first-round tie versus Russia, the highly rated Australian team is not taking any chances.

Without a single player in the top 100 and just one inside the top 200, the Russian team – Victoria Kan, Irina Khromacheva, Veleria Solovyeva, Veronika Kudermetova – is considered to be the underdogs but the Australians, led by world No.16 Sam Stosur, are refusing to get ahead of themselves.

“I think they are a young team, I think a few of them were in the Fed Cup final last year so they’ve had a little bit of experience but it’s not to say we take them lightly,” said Stosur.

“To be honest I only know one of the players and don’t know anything about her game. I’ve never seen the others before.

“They’ve got nothing to lose against us and I’m sure they’re going to give it everything they’ve got. So even though we don’t know much about them and their rankings aren’t that high, everyone starts somewhere and you’ve got to take every match equally and as importantly.”

The Australians have been hard at work with team captain Alicia Molik practising at the Domain Tennis Centre before the February 8–9 tie.

“The team has come very well prepared, they’ve all had quite a large [playing] volume over the summer and then also Ash [Barty] and Storm [Sanders] played last week in a Challenger here in Tasmania so the fact that they’re coming off a lot of tennis, a lot of matches, it’s really just about the finishing touches and making sure they feel like they can perform well on the weekend,” said Molik.

With the final team yet to be revealed, competition is hot for the second singles spot.

“I always encourage healthy competition and I want them fighting for the spots on the weekend. I like that within a team when it’s not necessarily a given at the start of the week [who’s going to play]. That’s how it should be,” said Molik.

Stosur, who will no doubt take the first singles spot, said that she’s happy with the make-up of the Australian quartet, which features a healthy balance of experience in Stosur and Dellacqua, backed up by the youth of Barty and Sanders, who is playing her first tie.

“I think we’ve got a great team,” said Stosur. “Storm’s a new addition but she was a hitting partner for the last tie we played last year, so she’s been in this environment before and knows what it’s all about.

“Casey and I have played many times, Ash is still a little bit new to it all but we all get along really well.”

Stosur, who was knocked out in the third round of the Australian Open hasn’t been sitting idly since her last match.

The US Open 2011 champion returned to her home base in Sydney for a couple of days off followed by a rigorous training block before travelling to Hobart where she will represent Australia for the 25th time.

“It’s nice to be back, had a good hit out with Casey, [we have] a few more days left so hopefully can get a bit better.”

Tickets for the 8–9 February tie at Hobart’s Domain Tennis Centre are on sale now through Ticketek.