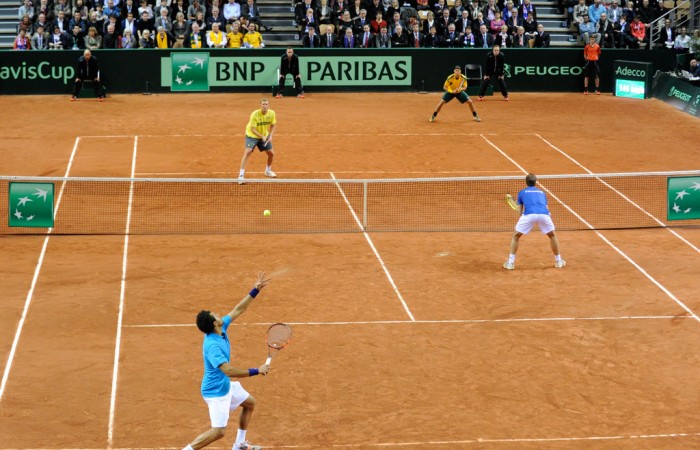 The defeat in La Roche sur Yon, western France, means Australia must return to the World Group playoffs later this year in a bid to compete in the competition’s top tier again in 2015.

After Gasquet and Tsonga gave the hosts a 2-0 lead with singles victories over Nick Kyrgios and Hewitt respectively on Friday, France went for the quick kill by surprisingly pairing their two highest-ranked players together for the doubles.

It paid off, though France had to fight back from losing the first set and trailing 5-2 in the second.

Hewitt and Guccione, a previously unbeaten Davis Cup duo, made a nervy start, winning only a handful of points as France raced to a 3-0 lead.

However they found their rhythm to fight back and take the first set.

Australia carried their form into the second set, leading 5-2 before France rallied back.

With a boisterous crowd behind them, Gasquet and Tsonga won the next three games before taking the set in a tiebreak.

The duo, blending power and precision beautifully, dominated the third set and always maintained control in the fourth, despite Hewitt and Guccione’s game efforts to fight back.

“I felt like we left it all out there and we had a crack and things didn’t quite go our way,” Hewitt said.

“We came here knowing it was going to be a really daunting ask.

“We came here with an inexperienced team as well and hopefully for the future there’s a couple of promising signs moving forward.”

Australia had returned to the Davis Cup’s top 16 for the first time since 2007.

Australian captain Pat Rafter always knew the nation’s first World Group tie since 2007 would be tough away from home, on clay, against quality opposition and missing the injured Bernard Tomic.

France could bring in Gael Monfils and Julien Benneteau after they were overlooked for the doubles.

Rafter hopes the decision to include rising teenagers Nick Kyrgios and Thanasi Kokkinakis in his squad can help ensure the 28-time champions can become World Group regulars again in the near future.

Rafter confirmed the teenagers would contest the reverse singles, both dead rubbers, on Sunday in a move that would hand Kokkinakis his Davis Cup debut.

“Bleeding these two young boys is what we’re all about,” Rafter said.

“They are the future. Three or four years down the track I think they’ll be very, very strong players so it’s a great opportunity right now to do that.

“… We came here and gave it out best shot, now we have to go home and regroup for qualifying.”

The reverse singles rubbers will be shown on 7TWO tonight (Sunday) from 11 pm AEDT. Check local guides for details.