Lleyton Hewitt and Nick Kyrgios have both suffered straight-sets defeats on day one of the Davis Cup World Group first-round tie against France. 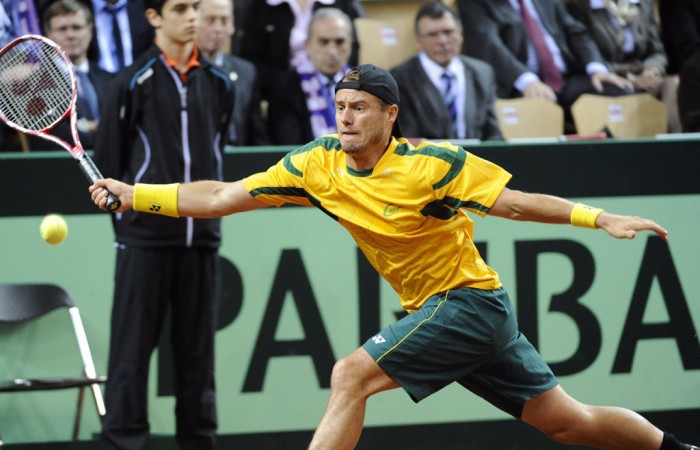 Lleyton Hewitt and Nick Kyrgios have both suffered straight-sets defeats on day one of the Davis Cup World Group first-round tie against France.

It left Australia trailing 2-0 in the best-of-five indoor claycourt tie in La Roche sur Yon and needing victory in Saturday’s doubles to keep the encounter alive. Hewitt will back up for that match alongside Chris Guccione.

Backed by an enthusiastic crowd in the western French town, Tsonga was ultra-impressive in securing a win in less than two hours to preserve his record of never having dropped a set to Hewitt.

He shut the Australian out of the match early with a superb display of serving to race to a two-set lead.

In typical fashion, Hewitt tried his hardest to fight back in the third set but Tsonga took the tiebreak comprehensively.

“He was just too good, simple as that,” Hewitt said after the loss.

“He served big, hit the ball big from the baseline and even when I had small opportunities he was just very quick to shut them out.”

Julien Benneteau and Gael Monfils are scheduled to play doubles for France but Rafter suspects Tsonga may come in for the latter.

Despite the pressure of knowing the tie is effectively sudden death for Australia from now on, Hewitt said he and Guccione would approach Saturday’s doubles rubber like any other.

“It’s a small step to try and give ourselves an opportunity to go into day three,” Hewitt said.

“It’s not going to be easy tomorrow, we know that, and they’re going to be confident and trying to finish it off.

“But we’re prepared and we’ll go out there and give it our best shot.”

An Australian side missing Bernard Tomic was always expected to struggle against a talent-packed France playing at home and on their favoured surface.

However Kyrgios raised some of hope of an early upset with a bright beginning against Gasquet.

The 162nd-ranked teenager went toe-to-toe with France’s No.1 in the first set, holding a 3-1 lead in the tiebreaker before losing six straight points to concede the set.

That appeared to take the spark out of the youngster’s game and Gasquet assumed control, closing out the match in just over two hours.

“If I win that first set, a lot of things can happen,” Kyrgios said.

“But I can sit here and say a lot of things that could have happened.

“After I lost that first set … I thought I wasn’t even playing that bad but he was just playing some really good tennis.”

Australia have returned to the competition’s top 16 for the first time since 2007 but a loss would send them back into the World Group play-offs for an eighth straight year.