Rising teenager Nick Kyrgios is nervous but confident he's up to the task of leading Australia into battle against Davis Cup heavyweights France. 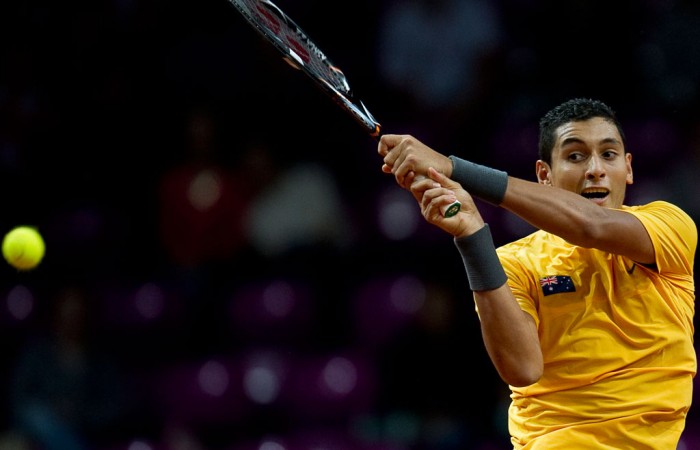 Rising teenager Nick Kyrgios is nervous but confident he’s up to the task of leading Australia into battle against Davis Cup heavyweights France.

The 18-year-old faces the biggest challenge of his career so far after being drawn to open the best-of-five World Group tie against French world No.9 Richard Gasquet on Friday (2330 AEDT).

Veteran Lleyton Hewitt will face tenth-ranked Jo-Wilfried Tsonga in the second singles match, with France overwhelming favourites for the the indoor claycourt tie in the western French town of La Roche sur Yon.

An injury to Bernard Tomic opened the selection door for Kyrgios and Davis Cup captain Pat Rafter is confident he will handle the occasion.

Kyrgios has already shown a flair for the big stage, winning his first senior Grand Slam match at last year’s French Open and reaching the second round of this month’s Australian Open before going down in five sets to 27th seed Benoit Paire.

The big-serving teenager was also part of last year’s World Group playoff win over Poland in Warsaw, but feels this is his biggest test yet.

“Those experiences [in Grand Slams and Davis Cup] are going to help me a lot but I’ve never led Australia into battle in a World Group tie,” Kyrgios told AAP.

“There’s a lot of excitement there but there’s nerves as well.

“I’m trying not to think about it too much.

“I’ve been playing some pretty good tennis on clay, it’s my best surface.

“I’m pretty confident as well but he [Gasquet] has played great tennis to get where he is and I’ve got a lot of respect for him.”

Ahead of a match that will showcase a contrast in styles, the crafty Gasquet said he was impressed by what he saw in Melbourne, where Kyrgios held a two-sets-to-love lead over Paire.

“He has a big serve, big forehand and he has nothing to lose,” Gasquet said.

“Of course I will be the favourite but I know he’s dangerous.”

Kyrgios edged out fellow rising star Thanasi Kokkinakis for a singles berth but Rafter said the latter could come into contention for Sunday’s reverse singles.

That will likely depend on how Hewitt backs up from his singles match and Saturday’s doubles, where he is scheduled to partner Chris Guccione against Gael Monfils and Julien Benneteau.

“We’ll wait and see how the next two days pan out,” Rafter said.

Hewitt has not won a set in three previous matches against Tsonga, though the pair have never met on clay.

Australia is back in the competition’s top tier for the first time since 2007 but faces a huge assignment to avoid being sent back into the World Group playoffs.

Rafter says he is “quietly confident” as Australia looks to orchestrate an upset that would book a quarterfinal against either Spain or Germany.