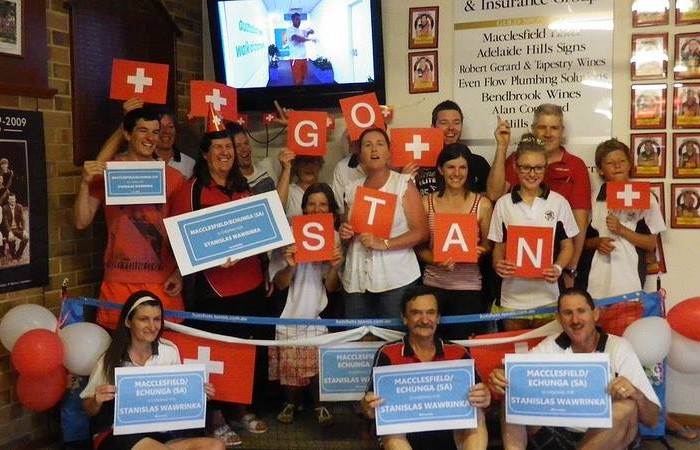 As the highest points earners in each town, Aaron Ackland from Watervale and Peter Baraglia from Macclesfield/Echunga  have won a $10,000 ANZ Advantage Access account.

Watervale demonstrated their support for Li Na by turning out to a tennis themed #Li4Watervale party at the Watervale Hotel, which included a special screening of the final. Locals gathered in force to watch Li defeat 20th seed Dominika Cibulkova, who’s AO Blitz support town was Warren in New South Wales.

“My motivation behind joining the AO Blitz was my children,” Aaron Ackland, Captain of the Watervale Tennis Club said.

“I’d love to see our local courts restored and be there for years to come. I could spend the money in so many ways but the most obvious for me would be to donate a portion to Watervale’s new courts fund. It has been a great motivator for our tennis club and community as we are in fundraising mode to replace our ageing courts,” he said.

“Completing challenges has brought many laughs and lots of enthusiasm to our club, with lots of interest from community members on what we are up to.”

Macclesfield/Echunga staged their own #Wawrinka4Macclesfield-Echunga party at the Macclesfield Sporting Complex last night, with the small South Australian community cheering Wawrinka on to his first Australian Open crown. He defeated world No1 Rafael Nadal who has received vocal support from the top AO Blitz town, Kendall in New South Wales.

Baraglia, Macclesfield Tennis Club vice-president was thrilled with the outcome. “The AO Blitz has been a good ride, as I’m sure it was for all towns. We were just lucky to get Stan. It started as a bit of fun and has been like a merry-go-round, lots of highs and lows.”

“All the club members got into it and enjoyed it,” Baraglia said. “It has been an experience and injected so much enthusiasm into our club – it has given us a whole new lease on life.”

“My wife has suggested to we go to Switzerland seeing as Stan won for us,” Baraglia said when quizzed on how he’d spend his winnings.

The AO Blitz is a national campaign designed to get more people playing tennis. People across Australia completed online challenges, earning points and putting their tennis credentials on the line. More than 100 towns across Australia staged free community tennis days, set a challenge to find the fastest local serve and were visited by the magnificent Australian Open trophies.

The leaderboard of 256 top-scoring Aussie towns was set just prior to the tournament, with each town awarded their own main draw player to cheer for. The AO Blitz is a grassroots program encouraging everyone and anyone to pick up a racquet and have a hit.

Watervale and Macclesfield/Echunga will work together with Tennis Australia and Tennis South Australia to determine the elements of their prize, which will include a celebration around World Tennis Day in March .

Players engaged in the AO Blitz by holding town signs, meeting town representatives and sending thank you messages to their towns before the finals: