As the dust settles on two weeks of world class tennis and entertainment, this is the final word. 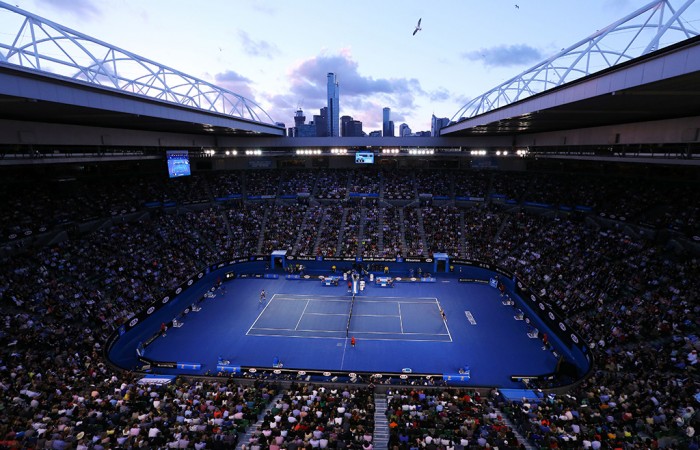 As the dust settles on two weeks of world class tennis and entertainment, this is the final word.

·         Eighth seed Stanislas Wawrinka (SUI) won his first Grand Slam singles title, defeating [1] Rafael Nadal (ESP) 6-3 6-2 3-6 6-3. Wawrinka became the first man to defeat both the No.1 and No.2 seeds at a Grand Slam since Spain’s Sergi Bruguera achieved the feat at Roland Garros in 1993. Wawrinka was presented the Norman Brookes Challenge Cup by Pete Sampras on the 20th anniversary of his 1994 Australian Open win

·         A total of 690 players competed across all events, including juniors, wheelies and legends

·         Australian tennis great Mervyn Rose was honoured at the annual Legends Lunch. The men’s singles and double champion at the 1954 Australian Championships was joined at the event by Australia’s triumphant 1957 Davis Cup team: Rod Laver, Ashley Cooper, Mal Anderson and Neale Fraser. Also at the lunch were 1984 Australian Open champions Mats Wilander and Chris Evert, as well as 1994 champion Pete Sampras.
A Night with Roger Federer and Friends

·         For the first time ever a special charity match, A Night with Roger Federer and Friends, was staged at Rod Laver Arena on Wednesday 8 January

·         A highlight of the night was Australian tennis legend Rod Laver joining Federer to play a few points on Rod Laver Arena. The YouTube clip of the hit-up has received more than 149,000 views.

·         The Victorian Government announced $338 million in funding for Stage 2 of the Melbourne Park redevelopment, including upgrades to Rod Laver Arena and a footbridge connecting Melbourne Park with Birrarung Marr and Flinders Street Station. Stage 1 of the redevelopment includes the new-look Margaret Court Arena, expected to be completed later in 2014. The new National Tennis Centre, featuring eight Italian clay courts, indoor and outdoor plexicushion practice courts, a state-of-the-art gymnasium plus treatment and recovery rooms was completed prior to Australian Open 2013

·         More than 600 journalists, photographers and videographers from 300 media outlets provided detailed coverage of the Australian Open, including 248 international media from 43 different countries. Asian media represented nine per cent of all international accredited media

·         More than 1000 broadcast media were accredited, broadcasting to more than 200 countries worldwide. Seven on-site networks were from the Asia-Pacific region

Digital and social media (as at Monday 27 January)

·         There were more than 17 million unique visitors to ausopen.com throughout the tournament period, an increase of 12 per cent on 2013 numbers

·         The largest percentage of online visitors to ausopen.com came from Australia, followed by the USA, Canada, the UK,India and China

·         The Australian Open You Tube channel had more than 8 million views, with more than 135,000 hours of content consumed by fans

·         The Australian Open Facebook page grew to 1,158,308 likes and a total reach of 12.5 million. The most engaged countries were Australia, the USA, India, the Philippines and the UK. Rafael Nadal and Li Na were the most mentioned male and female players on Facebook respectively

·         New in 2014, Twitter platform Snappy TV totalled more than 900,000 views. The most popular clip was Eugenie Bouchard revealing her ultimate date on court

·         Seven information towers were available to fans throughout the precinct, including at the Eastern Plaza

·         More than 110 racquets were rapidly restrung for players during matches

·         Serena Williams had the most racquets restrung of all players in the main draw, sending 45 racquets to the stringers

·         The Get Court Up tote bag, official men’s and women’s Australian Open towels and jumbo Wilson tennis ballswere among the most popular items at the AO Shop

·         The AO Blitz matched up tennis-loving towns around Australia with all 256 main draw singles players. Women’s champion Li Na was supported throughout her Australian Open 2014 campaign by the South Australian town ofWatervale, while men’s champion Stanislas Wawrinka was cheered on by Macclesfield/Echunga (SA). Towns ‘won’ a player by completing tennis challenges in the lead-up to the event.