Unfancied Swiss Stanislas Wawrinka has won the Australian Open with a dramatic upset victory over wounded world No.1 Rafael Nadal. 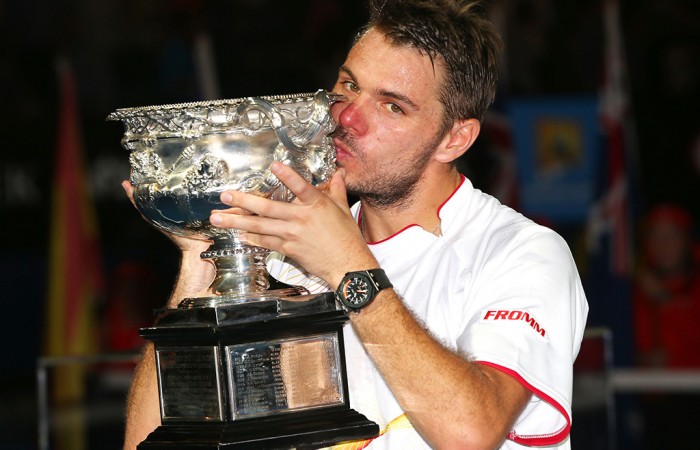 Unfancied Swiss Stanislas Wawrinka has won the Australian Open with a dramatic upset victory over wounded world No.1 Rafael Nadal.

Having never taken a set from Nadal in 12 previous meetings, Wawrinka prevailed 6-3 6-2 3-6 6-3 after the Spaniard ended Sunday night’s final as a virtual passenger.

Nadal’s movement was severely limited after he suffered a back injury early in the second set.

At one point, Nadal seemed certain to become the first man to retire from an Australian Open final since Stefan Edberg called it quits with an abdominal injury while trailing Ivan Lendl 4-6 7-6 5-2 in the 1990 championship match.

But the top seed gallantly played on and even snatched the third set as Wawrinka – contesting his first-ever major final – struggled to cope with the bizarre situation.

But the world No.8 pulled himself together to win the fourth set, the match and his maiden grand slam title after two hours and 21 minutes of high drama at Rod Laver Arena.

After defeating second seed and four-time champion Novak Djokovic in the quarter-finals, Wawrinka becomes the first man in 21 years to beat the world’s top two players en route to a grand slam title.

The 28-year-old’s breakthrough triumph also snapped a streak of 16 majors won by either Nadal, Djokovic, Roger Federer or Andy Murray.

All up, the so-called Big Four had won 34 of the past 35 grand slam titles stretching back to Marat Safin’s Australian Open final victory over Lleyton Hewitt in 2005.

Argentine Juan Martin del Potro at the 2009 US Open was the only other man to have broken their dominance in the past nine years.

For Nadal, it was a shattering conclusion to the tournament after the 27-year-old appeared on the cusp of tennis history.

The top seed was bidding to join Rod Laver as only the second man in 45 years of professional tennis to win all four grand slam titles at least twice.

He was also a raging favourite to climb to equal second place alongside Pete Sampras on the all-time grand slam leaderboard with a 14th career major.

Laver and Sampras were both in the stands on Sunday night.

The first sign of any trouble for Nadal came when he called for the trainer in the third game of the second set.

Playing some breathtaking and fearless tennis, Wawrinka had been in command and, upset by the stoppage, demanded to know exactly why his opponent was receiving a medical time-out.

The Swiss was involved in an angry exchange with chair umpire Carlos Ramos before tournament supervisor Wayne McKewen appeared courtside to explain.

Spectators jeered Nadal when he re-entered the playing arena, but it was soon apparent the world No.1 was in genuine pain.

He was unable to serve anywhere near full capacity and was broken for a third time as Wawrinka won the second set to take control of the match.

Earlier, before Nadal’s injury struck, Wawrinka had been on fire, taking the opening set in 37 minutes with some fearless and breathtaking shot-making.

Under mounting pressure at love-40 down in the opening game of the second set, Nadal received a time violation for taking too long between serves.

Nadal sought assistance from the ATP physio shortly after, but no one could have imagined the events to follow.

“Right now, I still don’t know if I’m dreaming or not,” Wawrinka said after Sampras presented him with the Norman Brookes Challenge Cup.

“We’ll see in the morning.”

Nadal was gracious in defeat, congratulating Wawrinka for his victory .

“You really deserve it,” he said. I’m very happy for you.”

After losing the longest grand slam final in history to Djokovic at Melbourne Park in 2012, Nadal missed last year’s tournament through illness just as he’d recovered an injury that had kept him out of the game for seven months.

“Last year was a very tough moment when I did not have the chance to play here,” he said, wiping back tears.

“This was one of the most emotional tournaments that I’ve played in my career.”