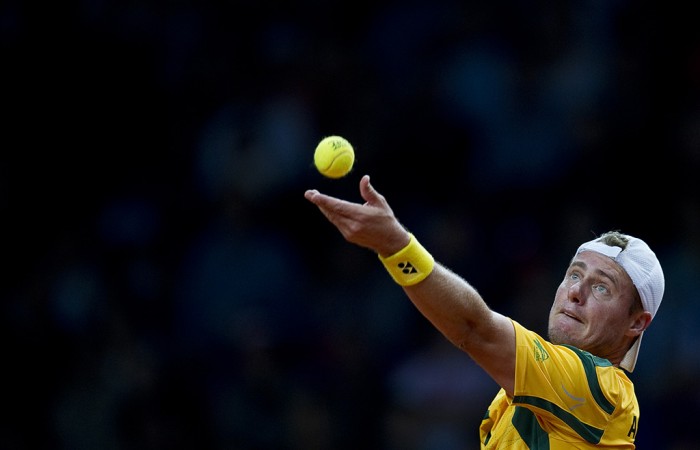 Led by top-10 stars Richard Gasquet and Jo-Wilfried Tsonga, France are overwhelming favourites to send Australia back to the drawing board and a World Group playoff for the eighth year in a row.

Boasting nine players in the world’s top 50, more than even superpowers Spain, Clement’s biggest challenge was picking back-up for Gasquet and Tsonga.

“It was not easy because we have so many players in France and they are all in good shape,” Clement told AAP.

The French skipper also has endless doubles options, but is limiting them to three.

“I don’t know yet. It depends on what will happen on the first day.”

Regardless on what happens in the opening two singles rubbers, Australian captain Rafter said Lleyton Hewitt would “100 per cent” contest the day-two doubles, most likely with Chris Guccione.

The fact that Rafter is back on the scene and Hewitt is still in the mix is enough to worry the French captain.

“We know how difficult it is going to be against Australia. Australia is a very big Davis Cup nation,” Clement said.

“It is France versus Australia. It is Lleyton Hewitt, it is Pat Rafter … the last time we played it was in a final for the Davis Cup.

“And the time before that against Australia, it was also in the final.”

And despite their incredible depth, France have not won the Davis Cup since defeating Hewitt, Rafter and company in a dramatic final in Melbourne in 2001, two years after Mark Philippoussis led Australia to a famous victory in Nice.

“There is pressure because we all know we are a team to potentially win the Davis Cup, but we didn’t win this competition for many years now, more than 10 years,” Clement said.

“So it is pressure. It’s pressure because all the generations don’t have these possibilities.

“But I think it is good pressure. This generation of players know they have a great opportunity for the next couple of years to win it, and they really want to.”

Australia’s team of Hewitt, Guccione, teenage tyros Nick Kyrgios and Thanasi Kokkinakis and young hitting partner Jordan Thompson were due to arrive in Paris on Friday.