Jordan Thompson says he can take a lot from his five-set match with Jerzy Janowicz yesterday at Hisense Arena. 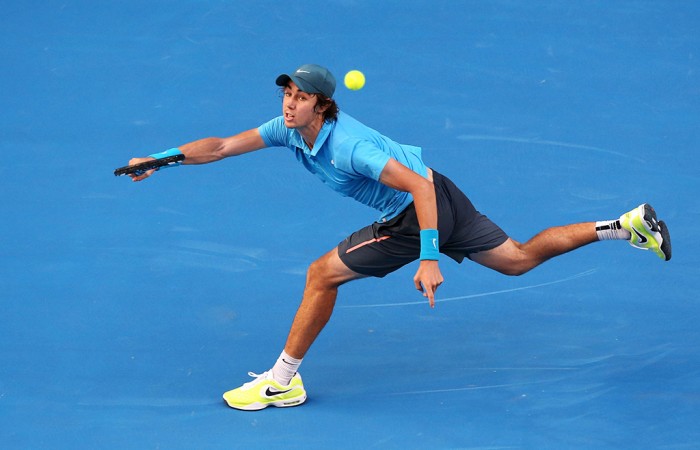 From a packed Hisense Arena to the courts of Burnie in Tasmania.

That is the reality that Australian 19-year-old Jordan Thompson will now face. Thompson came oh-so-close to pulling off a major upset in his first round clash with Polish No.20 seed Jerzy Janowicz at the Australian Open yesterday.

“(It’s) going to be a big drop going from a Grand Slam to a challenger in Burnie. Going to be nothing like this,” Thompson said after the match.

“Hopefully I won’t have to play too many futures this year.”

After the Australian had won the first two sets and had break-point opportunities in the third, Janowicz gave Thompson an insight into what it takes to be a top 20 player on the tour, powering away to take the match in five sets 1-6 4-6 6-4 6-2 6-1.

It was the fifth consecutive match Thompson had played against players ranked inside the top 100 and he admits he is learning a lot about the level of consistency they possess.

“Their level doesn’t drop too much. Maybe he didn’t start off the best today, especially the first set, but his level never dropped.

“He was getting a little bit angry, letting a couple of things get to him. But inside he didn’t let his level drop. That’s why he’s a top player.”

The experience a young player gains from a game the ilk of Thompson’s clash  with Janowicz cannot be understated. Lamenting what might have been, he already said he’d learnt plenty of lessons to take forward with him.

“I would have liked to have been a little bit more aggressive, maybe come to the net a bit more.

“But he’s aggressive from anywhere in the court.  He hits a big ball.”

Thompson won a lot of fans yesterday and says that the occasion is one he will love experiencing again in the future.

“It’s an unbelievable experience to play in Hisense Arena in front of an Australian crowd.

“It’s pretty fun out there until maybe the third, fourth, fifth set.”

The exposure that Thompson garnered from the match is something he hopes will sit him in good stead for future opportunities.

“It’s pretty good to have my name thrown out there, especially for the future if some of those guys are looking for a hit.  Hopefully they might ask me to hit so I can get some good practice.”

When it comes to plans for the rest of the year, Thompson hopes to continue the work ethic and form that allowed him to compete so well yesterday.

“I’ve just got to keep training hard and play the way I’ve been playing.

“Hopefully I can do well and gain a fair few points, so maybe I can play qualifying of the Grand Slams.

“After that we’ll look to see where I’ll defend my points at the end of the year.  That’s where I got my points from.”