Sanders ready to go to the next level

Storm Sanders was dropped into the cauldron today, both metaphorically and physically, but that did not stop the 19-year-old from putting on a gallant display in her first round match at the Australian Open. 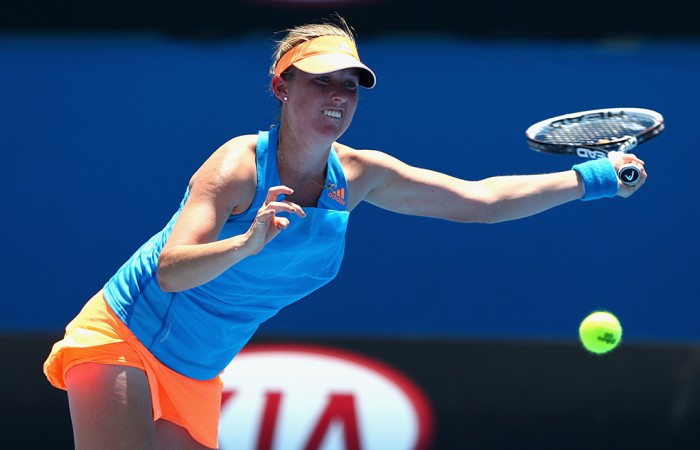 Storm Sanders was dropped into the cauldron today, both metaphorically and physically.

The 19-year-old Australian wildcard was greeted with temperatures of 40 degrees Celsius and a swirling breeze  when she took on Italian Camila Giorgi in her first ever appearance in the main draw of an Australian Open.

History will show that Giorgi took the match 4-6 6-1 6-4 but not before Sanders had put herself in winning position.

“I’m disappointed, but she played well and I just couldn’t get across the line,” Sanders said after the three-set encounter that lasted almost two hours.

“It was  hot and the wind was swirling and she doesn’t give you much rhythm.”

While she was left to ponder what might have been,  Sanders was quick to give credit to world No.99 Giorgi.

“I was 4-2 up in the third (set) and probably could have played a little bit better, but I gave her an opportunity and she took it.

“I tried to keep doing what I was doing but I probably tightened up a little bit on my serve and she took advantage of that and got a bit of momentum from that game.”

The element of power is an invaluable weapon in the modern women’s game, and Sanders has quickly identified it as a facet of her armoury that she would like to work on.

“I want to keep getting the physical work under my belt.  Obviously the girls are very strong girls and they can hit massive shots, so I just want to get in the gym and keep working hard.

“I feel like I can match it with these girls and compete with them. I still have got  a lot of improvement to do.

“If you want to compete at the level for a long time, it’s inevitable that you have to keep working on your strength.

“That is one of my strengths, I work hard and try to be as professional as I can.”

Sanders will now turn her attention to the women’s doubles at the Australian Open where she will team up with Jelena Dokic.

“I’ve been hitting with Jelena the last couple of months when she has been in Melbourne and I didn’t have a doubles partner.

“Me and her had been training pretty well together and she asked me (to play).

“It’s pretty cool to play with Jelena Dokic, you don’t get that opportunity often.”