Hewitt bows out in thriller 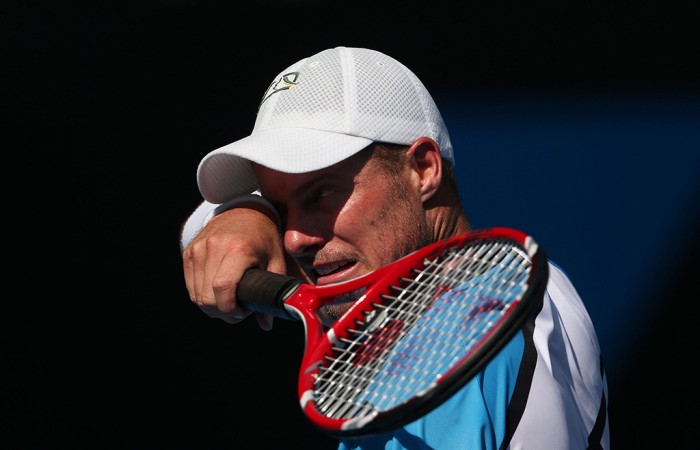 Hewitt’s impressive victories over Roger Federer and Andy Murray in an unbeaten start to the summer counted for nothing as the veteran bowed out with a 7-6 (7-4) 6-3 5-7 5-7 7-5 loss to Italian 24th seed Andreas Seppi.

Adding to Hewitt’s heartbreak, after blowing a two-set advantage, Seppi had to save a match point serving at 4-5 and 30-40 in the tension-filled fifth set.

Australia’s former world No.1 arrived with such high hopes but departed with a second straight first-round exit from the Open, his last victory at his home grand slam coming in a run to the fourth round in 2012.

He had to rally back from a break down to force the first-set tiebreaker, which Seppi took with a service winner.

In 40-plus degree temperatures, it was already a long way back – even for Hewitt.

Perhaps suffering from a let-down, Hewitt dropped his opening service game in the second set.

It was the only invitation the Italian needed as claimed the set with a big ace to take a stranglehold on the match.

Hewitt found himself in a deep, deep hole when he again lost his first service game at the start of the third set.

Typically, though, he launched a fightback, breaking straight back and then whipping the crowd at Rod Laver Arena into a frenzy when he snatched the set on a Seppi backhand error.

Again, though, he faltered on his opening service game in the fourth set, handing Seppi another early break with a double-fault.

Hewitt jumped around like his hero Rocky Balboa, punching jabs to the crowd as he bounded to his changeover chair after breaking straight back again and holding for 2-1 in the fourth set.

He raised his arms in triumph after seizing the set to ensure the 53rd five-set match of his celebrated career.

No active player can match Hewitt’s 32 five-set victories – but there was not to be a 33rd on Tuesday at the Open.

For the fourth consecutive set, the 32-year-old was broken on his opening service game in the decider.

Yet again Hewitt fought back to conjure his sole match point, but alas Seppi saved with his 17th ace.

Seppi gained the decisive final service break when Hewitt pushed a forehand wide and this time there was no way back as the Italian held his nerve to close out victory after four hours and 18 minutes.