Rod Laver Arena will be upgraded and access to Melbourne Park vastly improved under a $338 million second stage of the internationally renowned sports precinct’s redevelopment. 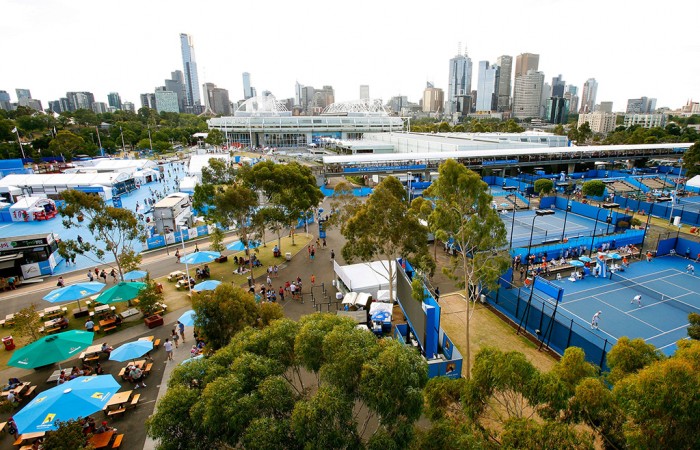 Rod Laver Arena will be upgraded and access to Melbourne Park vastly improved under a $338 million second stage of the internationally renowned sports precinct’s redevelopment.

Premier Denis Napthine today announced the funding and unveiled the details of the major project on the eve of the 2014 Australian Open.

“Major events such as the Australian Open deliver more than great sporting moments – they provide a massive boost to the Victorian economy and create new jobs,” Dr Napthine said.

“Year round, the Melbourne Park precinct hosts more than 2.1 million patrons across 200 events and delivers more than $420 million in economic benefits.

“This $338 million upgrade to Melbourne Park is critical to continue attracting global sporting, music and other cultural events such as the Australian Open.

“There is no doubt this work will keep Melbourne Park as the number one grand slam venue in the world and further cement Melbourne and Victoria as the global sporting capital,” Dr Napthine said.

Stage Two works will include:

– a new bridge over Batman Avenue from Birrarung Marr to Melbourne Park leading to a new western entrance for the precinct;

– a major refurbishment of Rod Laver Arena, including a new eastern entrance.

– a new central terrace with a state-of-the-art roof; and

– a bigger and better garden square.

The Victorian Coalition Government will contribute more than $298 million for stage two of the redevelopment while the Melbourne and Olympic Parks Trust will provide $40 million.

construction of a roof over Margaret Court Arena, the new National Tennis Centre training facility, the

Minister for Sport and Recreation Hugh Delahunty said Melbourne Park’s quality facilities were the envy of sports events across the world.

“One of the reasons Victoria has a hard-earned reputation in international sports is due to the quality of venues statewide that support our major events calendar,” Mr Delahunty said.

“This second stage redevelopment funding is part of the Victorian Government’s commitment to building and maintaining quality infrastructure, so we can stay ahead of the other states and countries competing for our major events.”

“This $338 million investment is estimated to generate in excess of $2.27 billion in economic benefits for Victoria and create 1,300 construction jobs,” Mr Hodgett said.

“This adds to the 2013/14 State Budget which provided a record $6.1 billion for investment in new and improved infrastructure around Victoria.”

The second stage of the Melbourne Park redevelopment is expected to begin following the staging of the 2015 Australian Open.