Kyrgios ready to step up at Australian Open

Nick Kyrgios says he can not wait for the Australian Open to start in Melbourne this week and is ready to step up against the best in the game. 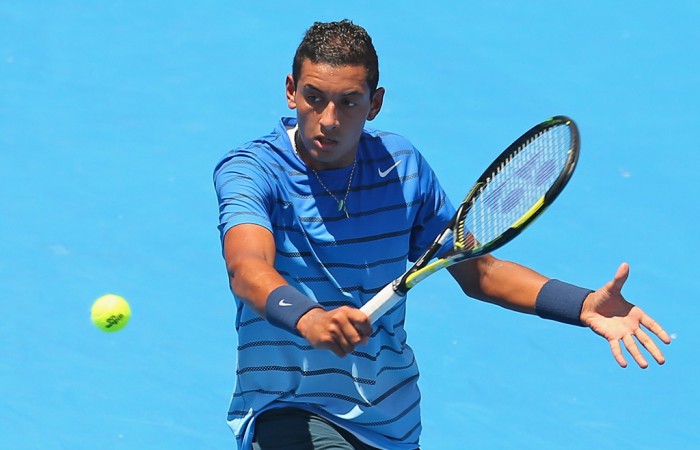 Nick Kyrgios had his first victory in Melbourne this week.

It may not have been against his first round opponent Benjamin Becker, but it was still worthy of a trademark fist-pump from the 18-year old from Canberra.

Kyrgios had just defeated fellow Australian Thanasi Kokkinakis in a game of virtual tennis at a sponsor event and will now focus on his first appearance at an Australian Open.

Kyrgios says that he doesn’t feel the occasion will get to him.

“I’ve had a lot of experience in the last year; I’ve played a couple of main draw men’s Grand Slam and I’m accustomed to the experience and how it feels.

“I’m confident I can go out there and perform pretty well.”

Kyrgios and Kokkinakis will both make their first appearances at the 2014 Australian Open after they met in the boys’ final last year, a match which Kyrgios won.

Kyrgios tackles world No.81 Benjamin Becker from Germany in the first round. He says he is happy with the draw.

“It could be a lot worse, but he has proven himself to be a solid player on the tour, he’s been around a long time.”

Kyrgios is one a group of promising Australian youngsters who have already made their mark in 2014 and he believes that could continue in the first Grand Slam of the year.

“There are guys like Jordan Thompson who have really been stepping up and taking it up to the top guys and I think that we are more than capable of doing some damage.”

The form of senior Australian players the ilk of Lleyton Hewitt and Bernard Tomic is something that Kyrgios says is inspiring the younger players.

“I can take a lot of confidence out of knowing that the top guys in Australian tennis are performing well.

“I did a lot of practicing with Bernard in the pre-season and he’s really knuckling down and it showed last week.”

Kyrgios says he is excited and cannot wait for the tournament to start.

“I’m going to go out there and just do what I do best, just play some tennis and see how it goes.”