Quality over quantity. Just a few weeks out from his 33rd birthday, that’s what Lleyton Hewitt considers most important when it comes to his tennis scheduling. And outside the Davis Cup, it’s the Grand Slams that are clearly top priority. 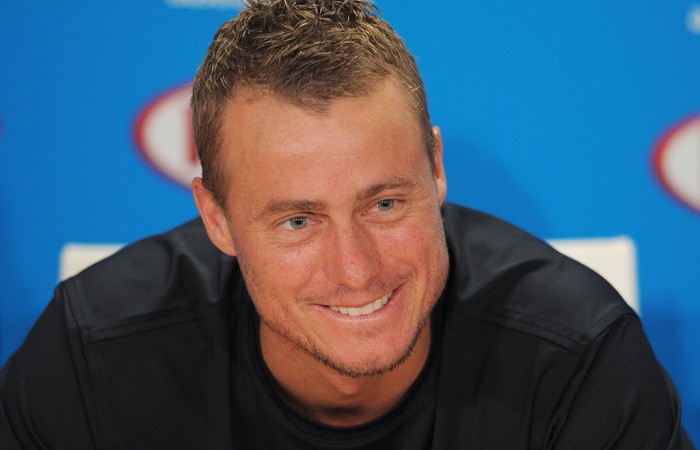 Quality over quantity. Just a few weeks out from his 33rd birthday, that’s what Lleyton Hewitt considers most important when it comes to his tennis scheduling. And outside the Davis Cup, it’s the Grand Slams that are clearly top priority.

“Obviously Grand Slams and Davis Cup (are) the pinnacle still, (they) mean a lot to me,” he said at Melbourne Park on Sunday.

“Personally, the Australian Open and Wimbledon are probably my two biggest events that I try to prepare as well as possible for. I just pick and choose my tournaments, where I want to play.”

So when it comes to his record 18th Australian Open run, the renowned Aussie fighter will be doing everything possible to make it count. Having defeated Roger Federer to claim his 29th career title in Brisbane last week, Hewitt withdrew from the AAMI Classic at Kooyong to be in the best physical shape for one of his most important assignments of the season.

“I feel pretty good. As good as I could have hoped for,” said Hewitt, who was pleased with the opportunity to practice on centre court on several occasions in recent days.

“This week has been good. Obviously relaxing for me, but still being able to get the hit outs that I want.”

If Hewitt is physically ready, he is perhaps mentally even more so, the top-ranked Australian man confident with the form that saw him claim his first tournament in more than three years in Brisbane. By contrast, 24th-seeded opponent Andreas Seppi is yet to notch a match win in 2014.

“My ball striking at the moment is as good as it’s been in a long time,” Hewitt said.

“I feel confident with what I’m doing down my end. I’ve just got to go out there and execute it.”

That could be just the attitude to take into a match against a statistically even opponent – Hewitt and Seppi have met six times since 2004, each winning three matches. Of equal or even more significance is the fighting spirit that saw the 32-year-old overcome career-threatening injury battles to achieve an unrivaled longevity on home soil.

“I didn’t think I’d still be playing at 30,” Hewitt conceded.

“To still be going just before my 33rd birthday is something that I’m really happy with.

“There was a period there I had to battle injuries just to get out there on the court here as well. That’s the pleasing thing and why I’m feeling mentally fresh and pretty good, because I did spend quite a bit of those chunks of those three or four years off the court.”

While many marvel at Hewitt’s 18 Australian Opens – in which he has played outside of Rod Laver Arena only once – more marvelous still is the fact that he is competing with such intensity. So keen is Hewitt’s focus on his home Grand Slam that he even convinced Pat Rafter to make a comeback as his Australian Open doubles partner.

“It’s good for both of us obviously,” Hewitt explained.

“I obviously looked up to Pat a hell of a lot growing up. He really helped me out. It’s great that he’s Davis Cup captain for me now. Most likely I’ll finish my career with him as Davis Cup captain, which is fantastic for me as well.

“While we’re still able to move around the court together, it’s nice that we can go out there and play in a Grand Slam.”

For a man who is focused more on quality than quantity, that surprise doubles pairing could make for a lot of tennis this fortnight. But this is the Australian Open – and as the top-ranked and arguably most keenly-watched local man competing, making it count even further is too valuable an opportunity to miss.