Barty looking forward to the challenge

Ashleigh Barty will clash with world No.1 Serena Williams this Monday night and can not wait for the challenge. 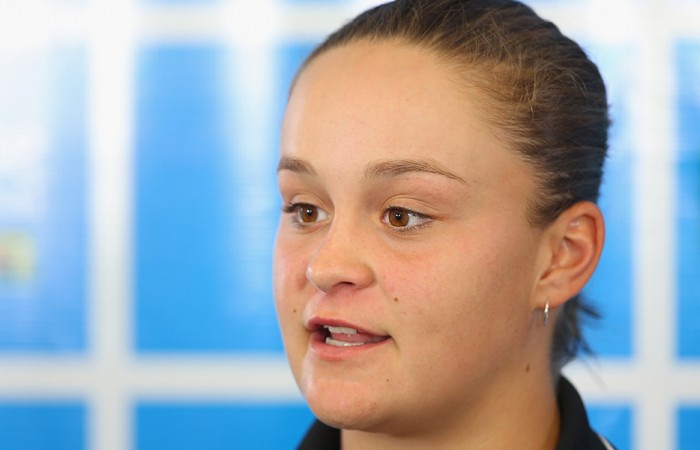 Ashleigh Barty just wants to be herself.

But like any precocious talent, there is always a propensity for comparisons. In Barty’s case it is with the youngest world No.1 in history, Martina Hingis.

“I’ve heard that a lot over the last two or three years.

“I don’t really want to be compared to anybody. I just want to play the best I can, create my own style of game.”

The 17-year-old Australian comes up against current world No.1 Serena Williams this Monday night on Rod Laver Arena in the first round of the 2014 Australian Open. It is an event that Williams has won five times, but that isn’t stopping Barty from thinking she can win the match.

“I think you have to go out believing you can win the match, otherwise there’s no point walking out on the court really,” said Barty in Melbourne yesterday where she is completing her preparations for the tournament.

“I’m going to do all that I can to try to win it. Whatever happens happens.”

Barty has started 2014 with a bang, winning four straight matches in Brisbane before having to withdraw due to injury. In 2013, she improved her singles ranking by 31 positions, as well as having a stellar year on the doubles circuit; she admits she exceeded even her own expectations.

“I think so, yeah. I mean, the doubles success I’ve had with Casey (Dellacqua) has been unbelievable. To go 4-0 in Brisbane is pretty good. Unfortunately, it didn’t end the way I wanted it to.”

Barty is buoyant that the success can continue and is excited about the match-up with the American Williams.

“I think the pre-season was really good for me as well. I’m just really looking forward to this challenge.

“Not every week do you get to go out and play against one of the greatest champions of all time. I’m really excited for the challenge.”

With the atmosphere sure to be electric, Barty is hoping that the parochial crowd will be something she can feed from in her bid to become the first woman to oust the top seed in the first round of the Australian Open since 1979.

“Yeah, I mean, this is what we all train for in the pre-season. It’s really exciting to have that opportunity first up.”

Williams, the consummate professional, was full of praise for Barty and admits that if it wasn’t her she was playing, she’d probably be cheering for her.

“I saw her play a little bit at Brisbane.

“I was actually super impressed with her game.”

Williams and Barty will clash on Rod Laver Arena this Monday night.