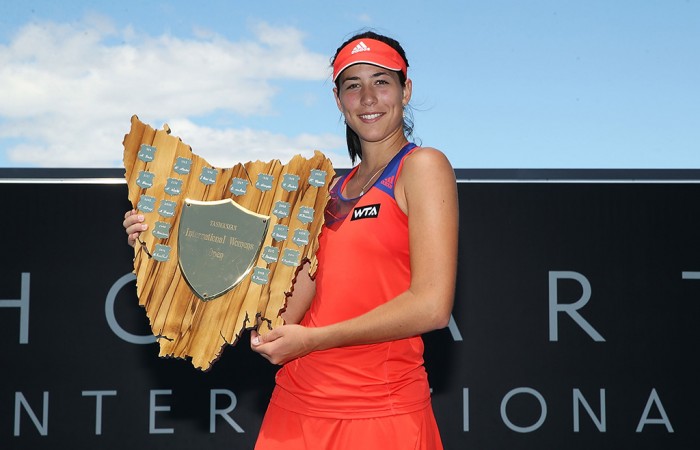 Rising star Muguruza had too much power for her veteran opponent, blowing her away with her groundstrokes on Saturday to become the second qualifier to win Hobart in three tournaments.

The 20-year-old Ana Ivanovic lookalike joins Germany’s Mona Barthel, who won in 2012, as the only qualifiers to win the tournament.

Six-foot Muguruza, the world No.58 but tipped for big things, knocked second seed and Wimbledon semi-finalist Kirsten Flipkens out on the way to her first WTA final.
The Venezuelan-born right-hander didn’t drop a set from the qualifiers to the final as she tuned up for a first-round meeting with Estonian 24th seed Kaia Kanepi at the Australian Open.

She swept aside compatriot Estrella Cabeza Candela 6-0 6-1 in the semi-finals to set up her meeting with 31-year-old Zakopalova.

The Czech had beaten top seed Sam Stosur 6-3 6-2 in the semis and will meet the Australian again in round one of the Open.

The pair traded breaks in the first before Muguruza’s power rose to the fore.

Leading 5-4, she grabbed the crucial break in the 10th game when Zakopalova netted on Muguruza’s first set point.

The Czech’s game looked to be falling apart when she lost her opening service game in the second and the writing was on the wall when Muguruza broke again to lead 4-0.

Zakopalova saved two match points in her final service game but double-faulted on the third to hand the title to the Spaniard in a final lasting an hour and 10 minutes.

Muguruza played her first Australian Open last year, losing in the second round.