Some of the world’s best tennis players took time out from their Australian Open preparations to take part in Kids Tennis Day at Melbourne Park on Saturday. 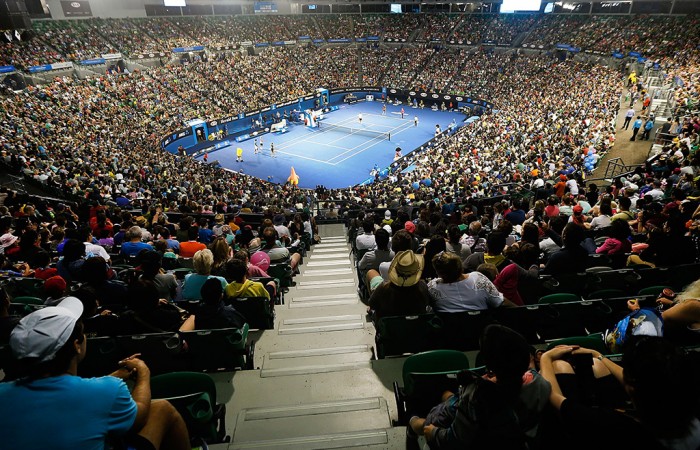 Some of the world’s best tennis players took time out from their Australian Open preparations to take part in Kids Tennis Day at Melbourne Park on Saturday.

The stars put on a show for adoring fans, with an exhibition match that included everything from playing with their opposite hands to the use of a giant-sized tennis racquet. The players had the crowd laughing with fun rallies and trick shots as they showed their less serious sides on court.

Hewitt’s five-year-old son Cruz showed he may one day follow in his dad’s footsteps, briefly replacing his famous father on court and thrilling the crowd as he rallied with Nadal.

Nickelodeon characters such as Spongebob SquarePants, Dora the Explorer and the Teenage Mutant Ninja Turtles also took to the court, adding to the fun atmosphere.

Earlier in the day, hundreds of children took to the courts at Melbourne Park to play MLC Tennis Hot Shots and enjoy entertainment and activities across the grounds. There was everything from face-painting, balloon artists, Nickelodeon performances and birds of prey on display. Fans could also get photos taken with the Australian Open trophies, with hundreds of people lining up for that opportunity.

Former top 10 player Alicia Molik, now the Australian Fed Cup captain and a MLC Tennis Hot Shots ambassador, spent time signing autographs and hitting with children. She said she was thrilled to be part of the day.

“It’s been unbelievable,” Molik said. “There are so many families that haven’t necessarily introduced their children to tennis yet, so there is no better way than bringing them to Kids Tennis Day. It is relaxed, fun and any kid can jump on the court and have a hit.”

“We were thrilled with the turn out,” Morris said. “To see so many kids come out on court and maybe pick up a racquet for the first time, see all the Nickelodeon characters then have the day culminate with the likes of Roger Federer and Rafael Nadal on court was just incredible.

“The fans love seeing the players so relaxed and having fun on the court, and the whole buzz around the venue was fantastic. It just goes to show what a great family sport we have.”