Australian tennis teens Nick Kyrgios and Jordan Thompson proved they are ready for the big time after impressing at the AAMI Classic. 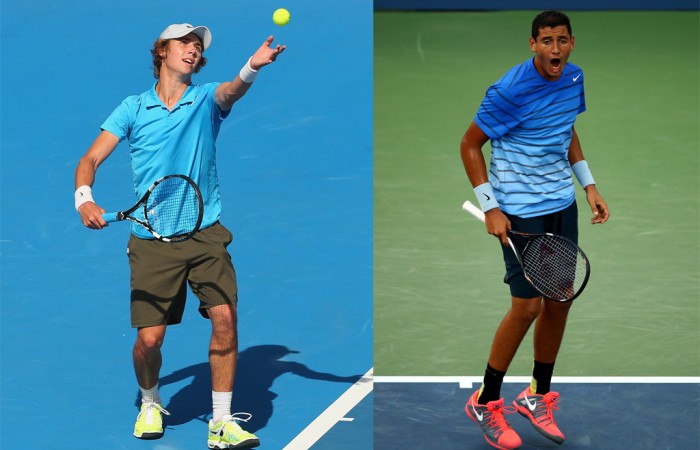 Australian tennis teens Nick Kyrgios and Jordan Thompson proved they are ready for the big time after impressing at the AAMI Classic.

The duo warmed up for next week’s Australian Open in hot conditions at Melbourne’s Kooyong, delivering strong performances against their highly-rated opponents.

Kyrgios was drafted into the eight-man invitational field following a string of withdrawals and got some important match practice before his Melbourne Park round one meeting with world No.81 German Benjamin Becker.

“I hadn’t played in a while and to play Fernando in my first match back was a great opportunity,” he said.

“It gives me a lot of confidence to be playing at that level in my first match; it’s a good sign with the Australian Open coming up.”

The 2013 Australian Open boys champion said he was over the shoulder problems that forced him out of the Brisbane International.

“It’s feeling a lot better and I’ve done all the right things for it.

“Today it felt good and I’m pretty confident it will hold up.”

After almost toppling world No.7 Tomas Berdych on day one at Kooyong, Sydneysider Thompson overcame Argentine world No.42 Juan Monaco 6-4 6-2.

The 19-year-old has drawn 20th seed Jerzy Janowicz from Poland in his Australian Open debut.

Thompson said he was initially concerned about just avoiding “embarrassment” against such quality players and his performance had boosted his confidence.

“It gives me a lot of belief that I can beat those guys,” he said.

He said Janowicz would be a tough proposition.

“He’s a giant and he’s got a massive game and serves huge.

“He hits it pretty flat … but that could be a good match-up for me.”