Fighting Stosur comes back from brink

Top seed Samantha Stosur has called on all her fighting abilities to down Frenchwoman Kristina Mladenovic in a heartstopping third-set tiebreaker at the Hobart International. 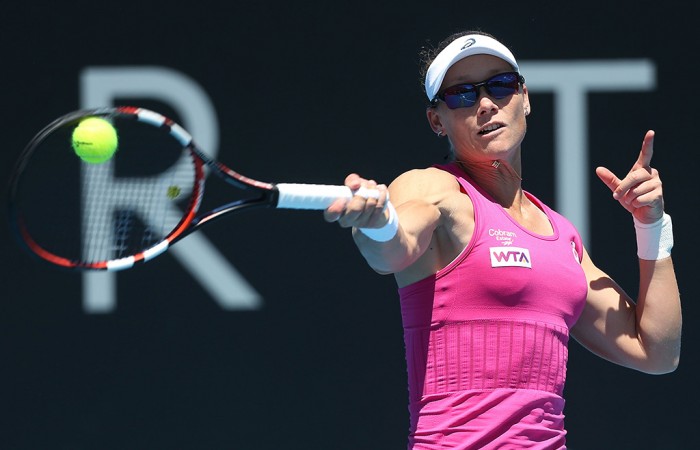 Top seed Samantha Stosur has called on all her fighting abilities to down Frenchwoman Kristina Mladenovic in a heartstopping third set tiebreaker at the Hobart International.

Stosur saved two match points in the tense conclusion before converting a second match point of her own for a gritty 6-4 2-6 7-6 (9-7) second-round win.

The Australian progresses to the quarterfinals, where she will meet eighth seed Bojana Jovanovski.

Stosur, the world No.17, came into the match with only a scrappy three-set win over qualifier Madison Brengle from four matches this season.

The 2011 US Open champion said she’d improved with each match since losing all three at the Hopman Cup, and she showed that against the massive forehand firepower of the tall Mladenovic.

Stosur was broken in the first game of the match but then broke Mladenovic twice to lead the first set 5-3.

The 20-year-old Frenchwoman broke again for 5-4 but her serving let her down and a double fault gifted the set to the Australian.

Mladenovic got the early break again in the second and led 5-2 before clinching the set with an ace.

Stosur broke early to lead the third 2-0 but was immediately broken by Mladenovic and in a tense set both players held until the nailbiting decider.