Lleyton Hewitt has pulled off stunning upset win over 17-time grand slam champion Roger Federer in the final of the Brisbane International. 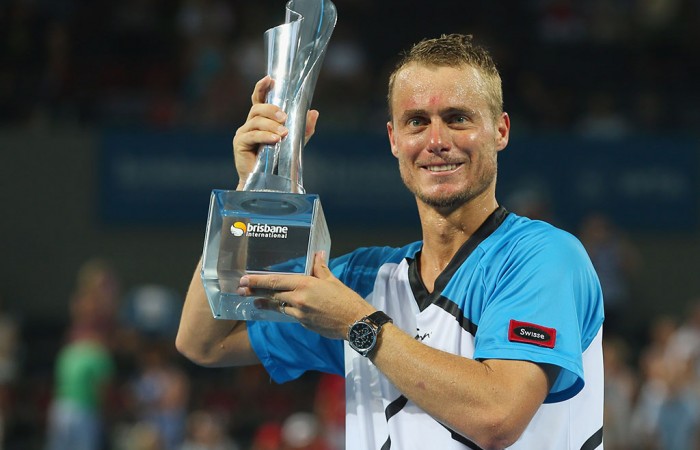 Lleyton Hewitt has pulled off stunning upset win over 17-time Grand Slam champion Roger Federer in the final of the Brisbane International.

Hewitt, the world No.60, showed little signs of fatigue following a draining semifinal win over Japan’s Kei Nishikori as he grabbed a 6-1 4-6 6-3 victory over his career-long rival and fellow former world No.1.

Swiss great Federer looked far from his usual self at Pat Rafter Arena, committing several out-of-character errors, including an early air-swing, as Hewitt sealed the 29th ATP Tour title of his career – his seventh on Australian soil but the first since the 2005 Sydney International.

World No.6 Federer’s performance in the first set, committing a whopping 22 unforced errors and being broken three times, raised speculation his troublesome back problems had flared up a week out from the start of the Australian Open, which Federer later denied.

But Hewitt showed no mercy for his fellow 32-year-old veteran, taking the opening set in just 27 minutes on his way to his ninth win over Federer in 27 career meetings.

If the Australian thought he was on an easy path to victory against a wounded opponent, Federer quickly dispelled that with an improved second set display.

A brilliant lunge volley to Hewitt’s left denied Federer a break midway through the set but when the Australian hit an easy forehand long in the ninth game, Federer pounced.

Hewitt could have gone 5-4 up had he completed the simple forehand but instead Federer responded to snare the break and then served out to love to level the match.

The Australian dug deep to hold his serve early in the deciding set, saving four break points in one game and also putting his frustration at being called for multiple foot-faults by a line umpire to one side.

Hewitt then put one hand on the Roy Emerson trophy as he broke Federer to take a 3-1 lead.

He still had to save a couple more break points but when given the chance to serve for the match Hewitt kept his cool to seal his seventh title on Australian soil and first since the 2005 Sydney International.

It also means the two-time Grand Slam champion has improved his record in finals on home soil to seven wins and two defeats.

Another benefit from the win is a boost to his ranking which will put him ahead of Bernard Tomic as Australia’s No.1 ahead of Tomic’s bid to defend his Sydney title this week.

Hewitt, who had the winner’s trophy presented to him by tennis legend Rod Laver, thanked his support team for their backing over the past few years where the 32-year-old has had to overcome several injuries to rebuild his career.

“We’ve been through a rough few years, four or five years, five different surgeries and to come out and play this kind of tennis, I want to thank everyone,” he told the Seven Network.

Federer, who was appearing in Brisbane for the first time, made no excuses for his loss, claiming Hewitt had simply been too good on the day.

“I would’ve loved to have won the title here this week but Lleyton was better than me today and I’ll still move on with wonderful memories from this great place.”