Williams and Azarenka to meet in Brisbane final

World No.1 Serena Williams has maintained her hold on Maria Sharapova, downing the four-time Grand Slam champion 6-2 7-6(7) in the Brisbane International women's semifinals on Friday night. 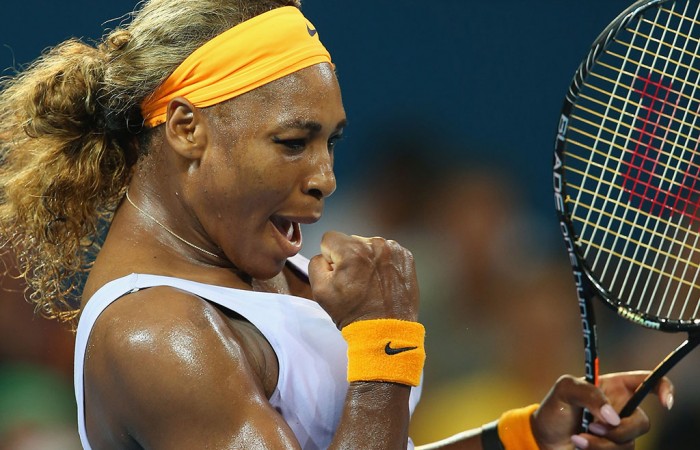 World No.1 Serena Williams has maintained her hold on Maria Sharapova, downing the four-time Grand Slam champion 6-2 7-6(7) in the Brisbane International women’s semifinals on Friday night.

Williams booked a title showdown with world No.2 Victoria Azarenka after clinching her 14th straight win over Sharapova, who last tasted victory over the American in 2004.

There was no love lost between Williams – the 17-time Grand Slam champion – and Sharapova in an intense semifinal.

> Visit brisbaneinternational.com.au for the latest news, photos and videos

And Sharapova’s coach Sven Groeneveld certainly tried to keep the fire burning Friday night during his miked-up court-side chat with his charge broadcast on live TV in the second set.

“You are playing fantastic – she knows you are in her face,” he said.

However, Williams still extended her overall record over Sharapova to 15-2 in another confident step toward backing up a remarkable 2013 in which she won 11 titles overall, two Grand Slams and more than $12 million in prize money.

The pair exchanged breaks early before Williams struck again in the sixth game, clinching the first set in 35 minutes.

Sharapova received treatment for a suspected jarred hand before breaking twice to jump to a 4-2 second set lead.

But Williams reeled in her nemesis, forcing a tiebreak and icing the result with an ace on her third match point.

Williams will line up against Azarenka who dodged a bullet against Jankovic.

The fourth-seeded Belarusian was overwhelmed in the first set and was forced to weather a spirited fightback from Jankovic in the third.

Azarenka led 5-1 in the third set before Jankovic reeled off the next three games.

But Azarenka dug deep to hold out world No.8 Jankovic in just over two hours.

She was unfazed about taking on either Sharapova or Williams.

“I always want to play against the best players every week,” she said.

“If there is no challenge it seems boring and un-motivating.”