France has secured a place in Saturday’s Hopman Cup final against Poland after Alize Cornet and Jo-Wilfried Tsonga posted wins at Perth Arena on Friday. 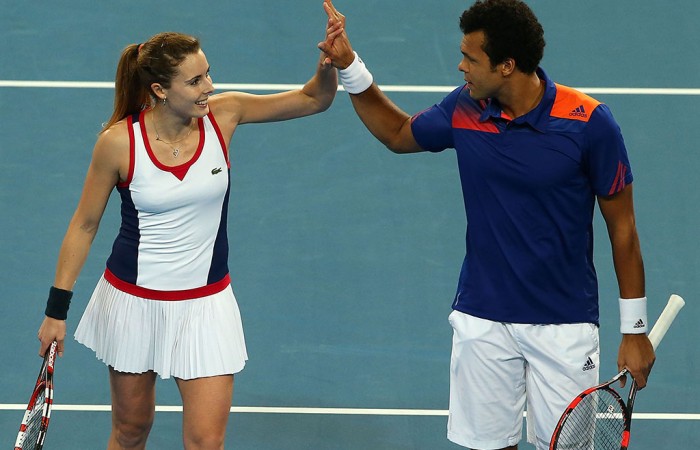 UPDATE: France has secured a place in Saturday’s Hopman Cup final against Poland after Alize Cornet and Jo-Wilfried Tsonga posted wins at Perth Arena on Friday.

The wins gave France an unassailable 2-0 lead in the tie, ensuring they finished on top of Group B.

Poland’s pairing of world No.5 Agnieszka Radwanska and Grzegorz Panfil finished on top of Group A after beating Australia 2-1 on Thursday night.

Tsonga had three match points in the second set, but he blew them all as Munoz-De La Nava pulled off a series of fine strokes.

The Spaniard needed treatment on his knee early in the deciding set, and Tsonga made the most of his opponent’s discomfort to close out the win.

“I was close to finishing it in two sets and then he came back,” Tsonga said.

“But we got to the final, so it is good. Now we can play the mixed doubles without pressure. I’m sure we’ll have fun.”

Cornet breezed through the first set in 39 minutes against Medina Garrigues, but her momentum was halted by a hamstring injury during the second set.

The 23-year-old stretched and flexed her left leg on numerous occasions, but fought on to win the match in 81 minutes.

Cornet said the injury was only a minor discomfort and wouldn’t force her to miss the final of the $1 million mixed-teams tournament.

“It’s the first match of the season so the muscles are getting used to it,” Cornet said.

“This is just soreness. I’m feeling OK. I just have to recover and take care of myself. I will be ready for the final.”

But the world No.27 said guiding France to their first Hopman Cup title would hold a special place in her heart.

“It would be one of my greatest successes of my career for sure,” Cornet said.

“I just want to bring back the trophy to France for the first time. It means a lot for me. I take it very seriously and I’ll give it my best to win it.”

Radwanska holds a 2-0 head-to-head advantage over Cornet in WTA events, but the pair have also had numerous battles during their junior days.

“We’ve played so many times and we’ve known each other for 10 years or more,” Radwanska said.