Comparing Ashleigh Barty to Martina Hingis won't hurt the young Australian, according to the former world No.1 herself. 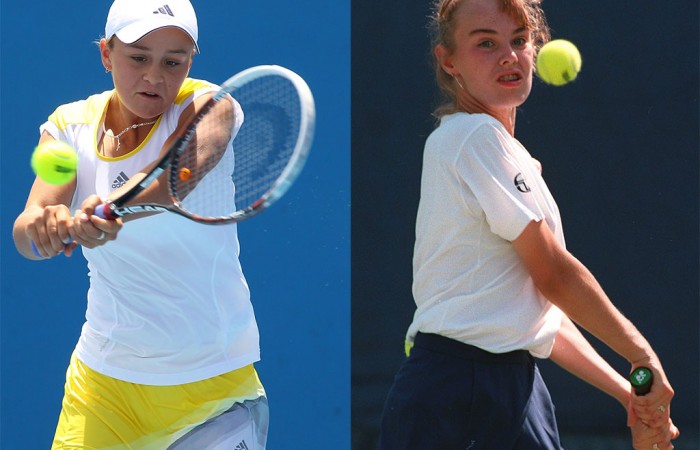 Comparing Ashleigh Barty to Martina Hingis won’t hurt the young Australian, according to the former world No.1 herself.

Barty has drawn comparisons with the five-time grand slam tournament winner for her small size and array of shots.

The 17-year-old Queenslander has been touted as one of Australia’s great tennis hopes since winning junior Wimbledon in 2011.

Hingis’s former coach David Taylor declared her at least as good as the Swiss champion at the same age but warned against over-burdening her with expectations.

Hingis said she had seen Barty play at the Wimbledon event.

“Obviously she was a lot talked about,” the 33-year-old told reporters in Hobart.

“I like her game because it’s quite good in variety.

“She’s quite a little player so definitely in today’s game it’s important to be solid, have a good serve.”

Hingis said she had expected Barty to progress further than her world No.190 ranking.

“In the last year we expected more probably from her than she actually has shown but I think when she’s here in Australia she can always be a dangerous player to face,” she said.

But Hingis said the comparison with her would not harm the Australian.

“I was compared to other players before so either you have the game or you don’t,” she said.

“I think eventually you reach the level that you have.”

Hingis said it was refreshing to see a player of Barty’s skill emerge in an era of women’s power tennis.

“Players were better educated (during my career),” she said.

“You kind of miss the players like myself or Justine Henin.

“That’s why a fresh face like Ashleigh that actually can mix it up and play a drop shot, it’s nice.”

Hingis will play an exhibition match against Swiss world junior No.1 Belinda Bencic at the Hobart International on Sunday.

She has again ruled out another singles comeback and said she was unsure about playing more doubles as her coaching projects grow.

“It depends on how she prepared in the off-season.

“Australia always tells … if you’re ready, what you trained like in December.

“That kind of shows in Australia.”