Australia's live mixed doubles rubber loss at the Hopman Cup to Poland has sent the Poles into the final ahead of Canada in Perth. 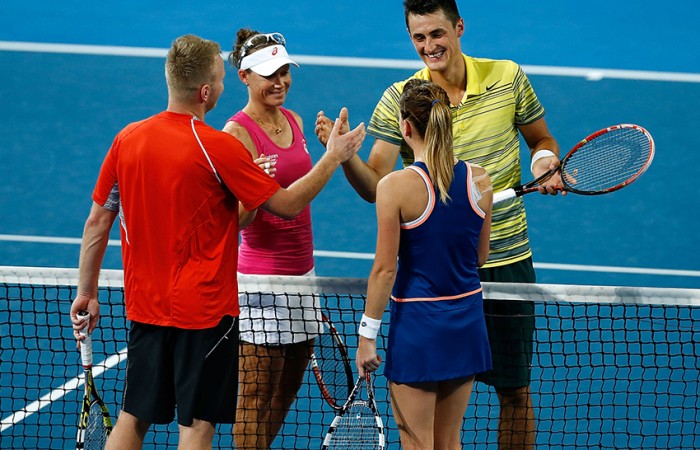 Bernard Tomic tried his best but ultimately couldn’t do his good friend Milos Raonic a favour as Poland sealed a place in the Hopman Cup final in thrilling style.

Poland only needed to win a set in the mixed doubles against Australia to secure a spot in the decider.

That looked to be a tough task after the No.1 seeds lost the first set 6-1 in 18 minutes.

But Australia’s pairing of Tomic and Sam Stosur conceded a tight second set, meaning Poland advanced to the final instead of Canada’s team of Raonic and Eugenie Bouchard.

France will also secure a spot in the final if they can beat Spain on Friday.

Earlier, Stosur put up a dogged fight in the women’s singles rubber before succumbing to world No.5 Agnieszka Radwanska 3-6 6-4 6-3 in front of 9789 fans at Perth Arena.

That came after Tomic recorded a 6-1 6-4 win over Grzegorz Panfil.

Radwanska needed an injury time out midway through the second set to receive treatment on her heavily-strapped right shoulder.

But the 24-year-old bounced back strongly, levelling the match at one set apiece before securing the win in 143 minutes.

Stosur lost all three of her singles matches but says the mixed-teams tournament was better for her preparation than the Brisbane International, where she made a first-round exit last year.

“Even though I’ve had three losses compared to one loss in Brisbane, I do feel better at this stage,” Stosur said.

“I would have loved to have won them all, or even one.

“But I’m getting that match play. I’m having some long matches, which is exactly what I need at this point in time.”

Tomic won two of his three singles matches and felt he was well prepared to defend his Sydney International title.

“I’m happy with this confidence leaving for Sydney,” Tomic said.

“If I have the chance to start the tournament well there I think I can defend it.

“But there’s a lot of good players during Sydney, I’ve got to prepare well.”

Radwanska said her shoulder injury was something she needed to manage, but wouldn’t be an issue for the final.

“I’ve had issues with the shoulder for a long time now,” she said.

“It was a little bit sore and tight. But I was able to continue.

“It’s a tendon. I’m getting inflamed as well. When you keep going, it’s not helping the shoulder .But it’s ok.”