Sam Stosur will be aiming to secure a much-needed win when she takes on world No.5 Agnieszka Radwanska at Perth's Hopman Cup on Thursday. 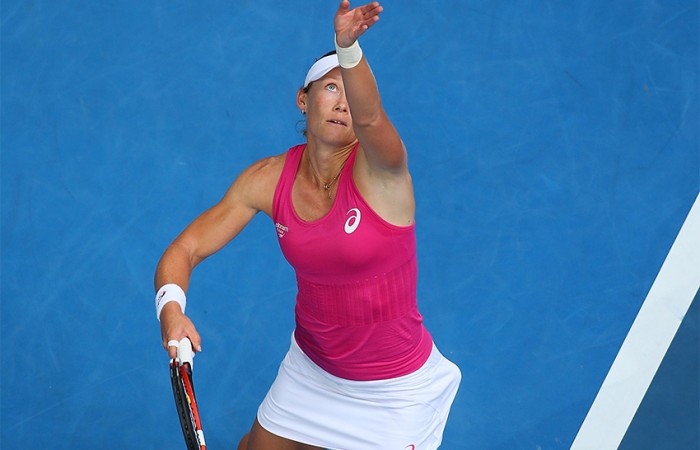 Sam Stosur will be aiming to secure a much-needed win when she takes on world No.5 Agnieszka Radwanska at Perth’s Hopman Cup on Thursday.

Stosur has already suffered losses to Canada’s Eugene Bouchard and Flavia Pennetta at the mixed-teams event.

The 2011 US Open champion is notorious for her slow starts to the Australian summer, but boasts a 3-1 winning record against Radwanska.

Stosur is yet to win in her two singles matches under her new coach Miles Maclagan, however, the 29-year-old says there is no reason to panic just yet.

“Look, it’s not going to be an overnight thing,” Stosur said.

“It’s those little steps I’ve got to look to and say, ‘Ok, the couple of things that we worked on, did we do better today?’

“If so, then there’s always going to be a positive to take away from it.

“It’s hard sometimes to start the year and really get some momentum and I’m certainly going to try and turn that around as quickly as possible.

“Practise had been fantastic for the last three weeks, but then you get in these tournament situations and obviously it’s different.”

Australia’s Hopman Cup title hopes were dashed when they lost 2-1 to Italy on Tuesday.

Tomic posted a fighting 4-6 6-3 6-2 win over Andreas Seppi in that tie, and will start hot favourite against world No.288 Grzegorz Panfil.

However, Panfil belied his lowly ranking on Sunday to post a shock win over world No.11 Milos Raonic.

Tomic is in the midst of a heavy training load and conceded he felt tired during his win over Seppi.