Veteran Lleyton Hewitt is confident his game can only improve after overcoming teenage qualifier Thanasi Kokkinakis in the first round of the Brisbane International on Tuesday. 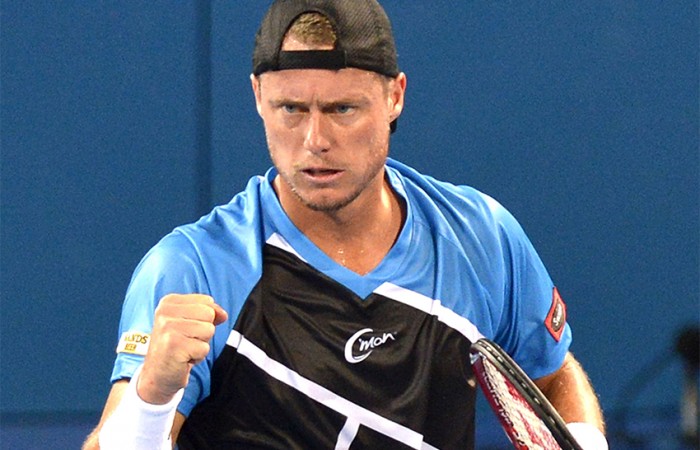 Veteran Lleyton Hewitt is confident his game can only improve after overcoming teenage qualifier Thanasi Kokkinakis in the first round of the Brisbane International on Tuesday.

The 32-year-old was made to work hard by the impressive South Australian Kokkinakis before claiming a 6-3 7-5 victory in one hour and 40 minutes at Pat Rafter Arena.

Hewitt may have expected to cruise into the second round after overcoming a bright start by Kokkinakis to claim the opening set but the 17-year-old refused to follow the script.

A break in Hewitt’s second service game in the second set put the two-time Grand Slam champion under some pressure and it wasn’t until the 10th game of the set he was able to break back.

After that though the world No.628, playing in his debut ATP Tour match, appeared to lose his spirit and Hewitt was able to close out a win which sets up a second-round clash with Spanish sixth seed Feliciano Lopez.

“It was an awkward match out there tonight for me,” Hewitt said.

“At the Brisbane Davis Cup tie here when we played Korea, I tried to help him out quite a bit on this court actually.

“I was out that tie with a foot injury, so it was sort of a weird feeling out there tonight playing against him.”

Hewitt reserved praise for Kokkinakis, who earned his main draw berth after coming through three qualifying matches without dropping a set.

The world No.60, who won the Adelaide ATP event in 1998 when Kokkinakis was just one, said the teenager will be pushing for Australian Davis Cup selection in no time.

“We saw that this year. No one would have predicted Nick (Kyrgios) to get the opportunity to, one, be in the four man squad, and, two, actually play a live rubber as well.

“Thanasi is probably at the moment one of the next in line. James Duckworth is another one on ranking who is probably the next guy as well.”

Hewitt will now aim to go one better than he did in Brisbane last year when he takes on Lopez in the round of 16 but he was wary of the challenge that lay ahead from the Spaniard.

“He’s going to be really tough on these courts,” he said.

“They’re playing a lot quicker this year, as quick a hardcourt as I’ve played on in a long time, and his game suits this kind of court perfectly.”