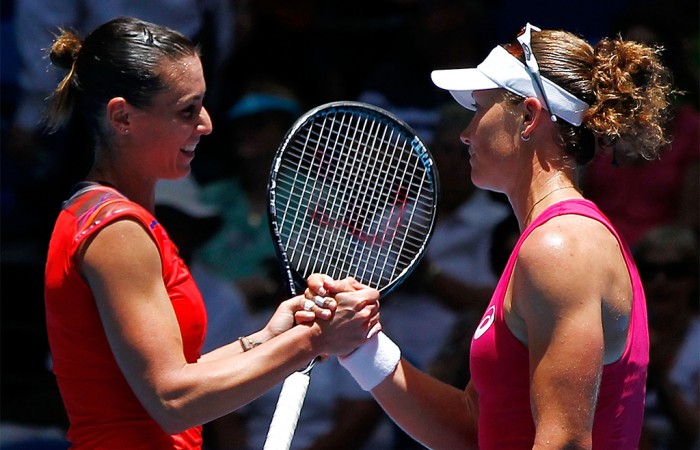 Stosur, who suffered a three sets loss to Eugenie Bouchard on Saturday, committed 26 unforced errors on the way to a 6-4 6-4 loss to Italy’s Flavia Pennetta at the mixed teams event in Perth on Tuesday.

The 2011 US Open champion has famously struggled to find form during the home tennis summer in recent years, but says there’s no need to panic just yet ahead of the Australian Open.

“It’s disappointing not to get a win again. But I thought I played some good tennis,” Stosur said.

“Every year I’ve managed to play well at some point. It’s not like you start not so well and then your whole year is shot.

“Time on court is the most important thing at the moment and that’s why this tournament is so great.

“I’m sure with each day I can take a bit more from it and build on what I’ve been doing.

“I’m still pretty happy with the way I’m hitting the ball. There’s room for improvement, but I don’t think it’s the worst start I’ve ever had.”

Stosur has now lost all five of her meetings with Pennetta, who is ranked 13 places behind the world No.18 Australian.

The Queenslander only committed four double faults for the match, but three of those came in the crucial ninth game of the second set.

Those errors gifted Pennetta the only break of the set, with the Italian holding her own serve next game to secure the win in 90 minutes.