Groth aiming to continue his ascent

Arriving in Brisbane with a career-high ranking and a wildcard into the main draw, Sam Groth hopes that the Aussie summer acts a springboard to greater success on the men's tour. 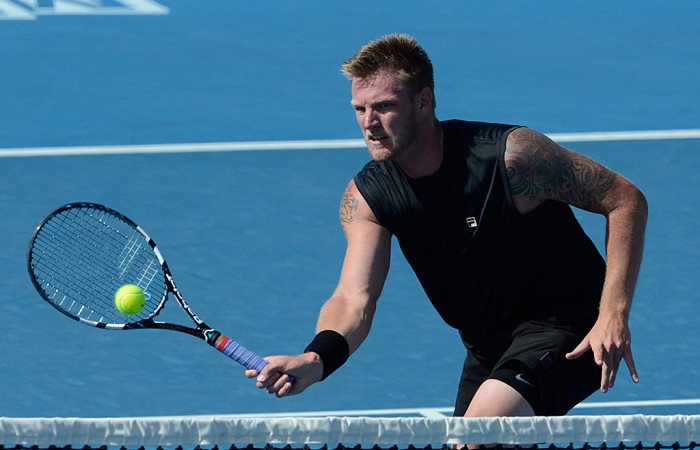 The gains from a career-best year in 2013 have spilled over into the new season for Sam Groth.

The big-serving Victorian, originally travelling to the Brisbane International with the intention of contesting the qualifying tournament, was given major boost thanks to a wildcard into the main draw, and even scored a winnable first round match when dealt qualifier Ryan Harrison at Saturday’s draw ceremony.

The wildcard is simply reward for a string of excellent results for the 26-year-old, who arrives at the Queensland Tennis Centre with a career-high ranking of No.172 and brimming with confidence.

The fact that Groth was absent from the game less than two years ago, with a ranking that has ballooned to 788th, makes such an outcome all the more surprising.

For much for 2011, Groth ditched the tennis racquets and turned his attention to Australian Rules football, playing for Vermont in Melbourne’s Eastern Football League. He returned to tennis following the football season, yet even as he slashed his ranking by more than 600 places in his comeback year of 2012, Groth admitted to feeling like he was “going through the motions”.

Linking up with new coach Ben Mathias proved a major turning point. As part of a shared arrangement, Groth – along with compatriots John Millman, John-Patrick Smith and Matt Reid – went on the road with Mathias, and he rediscovered his passion and drive to compete.

“I got along really well with him, we chatted and discussed how I needed to apply myself day in and day out, and get fit – it was about my professionalism, about doing all the little things,” Groth revealed.

“I’ve now dropped 10 kilograms and my skin folds are down to the best they’ve ever been. Plus 2013 was my fullest season after struggling with injuries – I played nearly 30 tournaments.

“(The improvement has been) a whole process. It started with diet; I’m a big guy already so it’s about being strict with that. I also increased my workload both on and off the court. I do a lot more distance running and a lot less lifting in the gym, more focusing on bodyweight exercises.

“I decided to skip the (Australian Open) Play-off and focus on a training block; even in that time I’ve lost four kilograms and dropped my skin folds by 20 points.”

Such dedicated work off the court has lead to some major gains on it.

Groth qualified for every ATP event he entered in 2013 – at London’s Queen’s Club, Washington DC and St Petersburg – and also enjoyed success at the Challenger and Futures level, clinching the Australian Pro Tour title in Mildura and capping the year with a finals finish at the Champaign Challenger and semifinal appearance in Toyota, Japan.

He enters the 2014 season having won seven of his past nine matches, and following his Brisbane International campaign, will turn his attention to qualifying at the Australian Open.

“I haven’t performed as well as I would have liked in Australian Open qualifying in the past … I was lucky enough to get a wildcard in 2009; there’s nothing better than playing in front of your home fans,” he said.

“I want to be (regularly) playing ATP events and the Slams, and want to get myself out of playing Challengers, and playing more at main tour level, especially moving towards this at the end of 2014 and into 2015.”

A strong result to kick off his season at the Brisbane International could very well help make that goal a reality.