Australian duo Bernard Tomic and Sam Stosur will be aiming to bounce back to the winners' list when they take on Italy in Tuesday's Hopman Cup tie at Perth Arena. 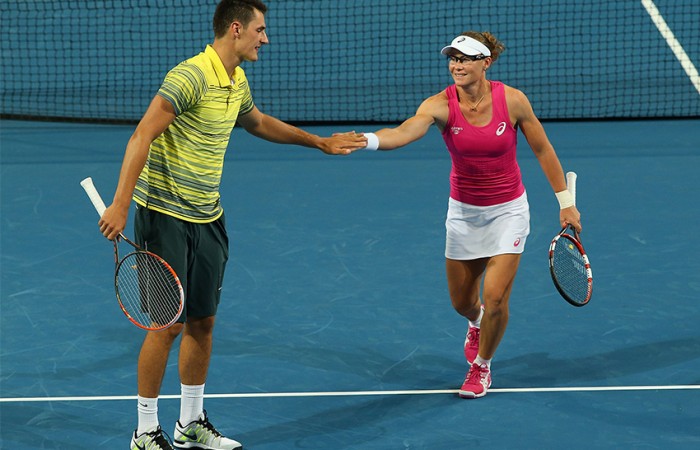 Australian duo Bernard Tomic and Sam Stosur will be aiming to bounce back to the winners’ list when they take on Italy in Tuesday’s Hopman Cup tie at Perth Arena.

Tomic slumped to a 7-6(6) 6-1 loss to world No.11 Milos Raonic on Saturday, while Stosur made her customary slow start to the Australian summer in a 4-6 6-2 6-3 defeat to rising Canadian star Eugenie Bouchard.

Stosur, who has slipped to 18th in the world rankings, was a tad rusty in her match against Bouchard.

The 29-year-old generally starts slowly after an off-season break, but she’ll have to be on the ball if she is to snap a four-match losing streak against Flavia Pennetta when they lock horns on Tuesday.

“She’s been really tough for me to play against in the past,” Stosur said of the world No.31.

“She moves very well. She likes to stay up on that base line. She hits the ball very flat.

“She’s a good all-round player, so I have to try to look for some of her weaknesses and exploit them as best as I can.”

On paper, world No.51 Tomic faces a stern challenge against Andreas Seppi, who is 26 places above him in the rankings.

But the 21-year-old Australian will enter the clash full of confidence after beating the Italian in all three of their previous clashes, including their Hopman Cup meeting last summer.

Seppi was forced to retire due to illness from his clash with Grzegorz Panfil on Saturday, but is expected to recover in time to take on Tomic.

Australia lost their opening Hopman Cup tie 2-1 to Canada, and need to beat Italy if they are to have any chance of breaking the nation’s 15-year title drought.